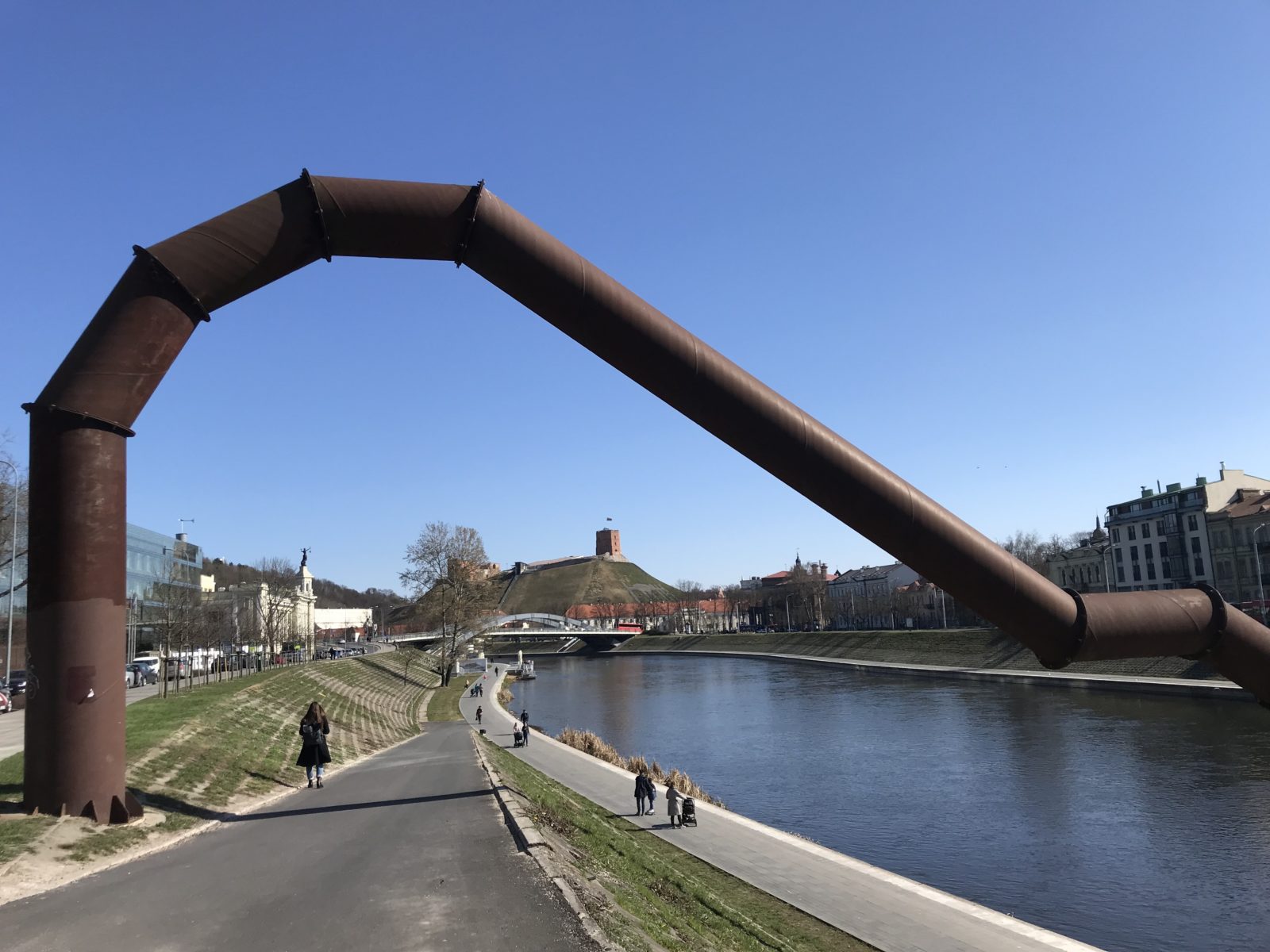 Not sure what the capital of Lithuania is after reading the title? No worries, to be completely honest nothing came to my mind either! Lithuania is a small, Baltic country located near Russia, Latvia, and Estonia, and the capital is Vilnius, by the way. 😉

I flew in late but also flew out late, so all in all I had 3.5 days to soak it all in, and started in Vilnius. Vilnius in and of itself isn’t all that big, but like many of the old Soviet-block countries, it is spread out, and that means lots of walking. (Or bus catching if you’re more like me.) I started with a hop on hop off bus tour of the city, which I normally don’t do because they tend to be pricy, but for one day it was only 15 euros, and with the Vilnius city pass (20 euros for 24 hours—definitely worth it for the both free tours and free admission into all the museums) it was free! 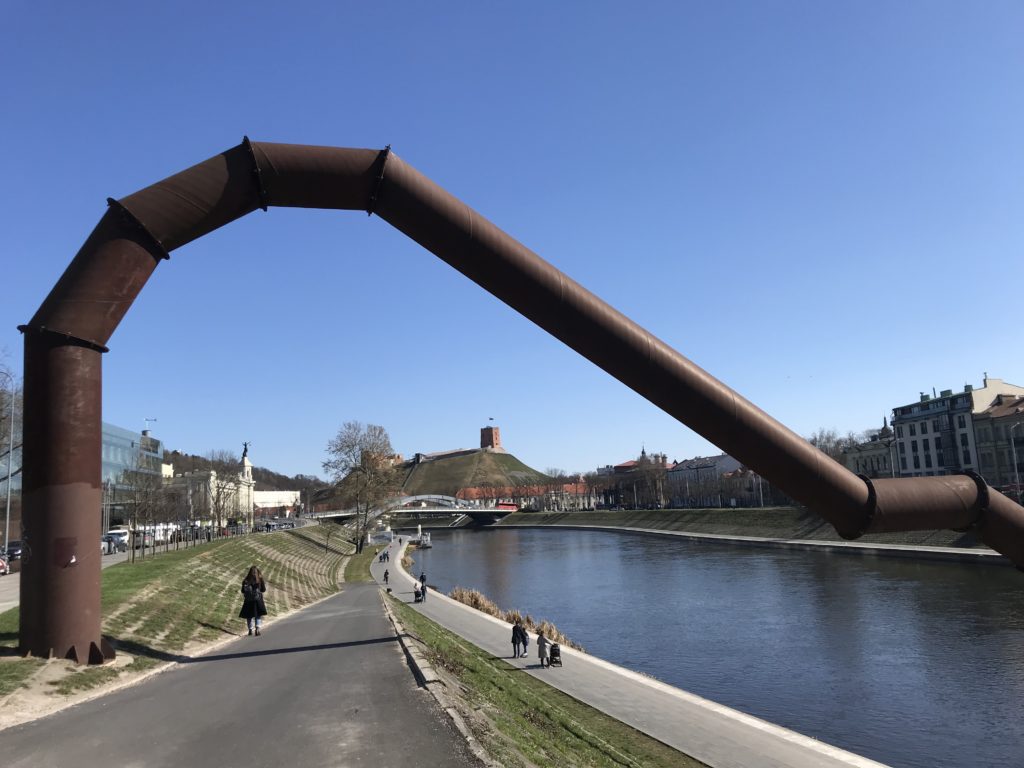 After getting a good feel for the city, I went to the National Museum, which housed an interesting historic and folkloric collection, and then to the Palace of the Grand Dukes, which offered more historical information and the traditional set up of the palace when it was inhabited by Grand Dukes of the duchy of Lithuania. Next was a walking tour of Soviet history as it impacted Vilnius, including the architecture around town, and then I finished off the day with a visit to the remaining tower of what was once the Gediminas castle. The hike up the hill wasn’t all that bad, and from the top of the tower one could appreciate a stunning view of the city and surrounding area. 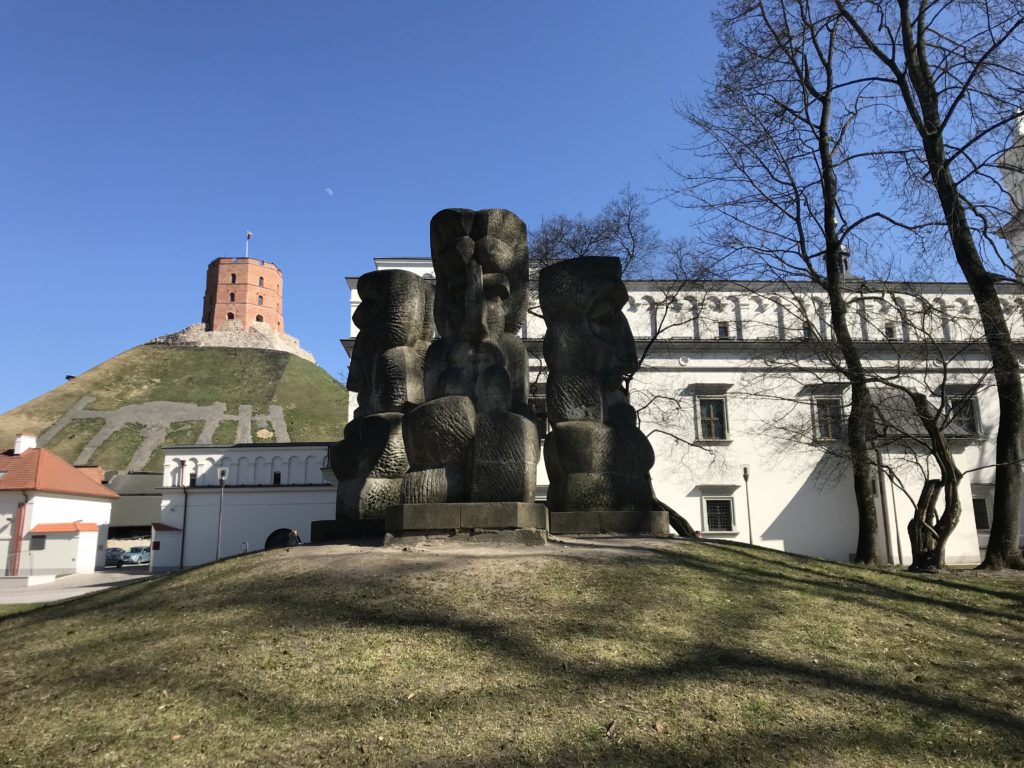 I finished sightseeing in Vilnius on my last day there before taking my late flight, so for now let’s go to the medieval town of Trakai, a small village of 3,000 people set between two lakes. It is most famous for its two castles, one on an island connected by pedestrian bridges, and the other more inland. The second is now a history museum, while the first has been maintained as a castle with a historical exhibition and many levels to climb (as can be seen from the picture)! After touring the castle, I had a nice walk along the lake before catching the bus back to Vilnius, a quick 40-minute ride. 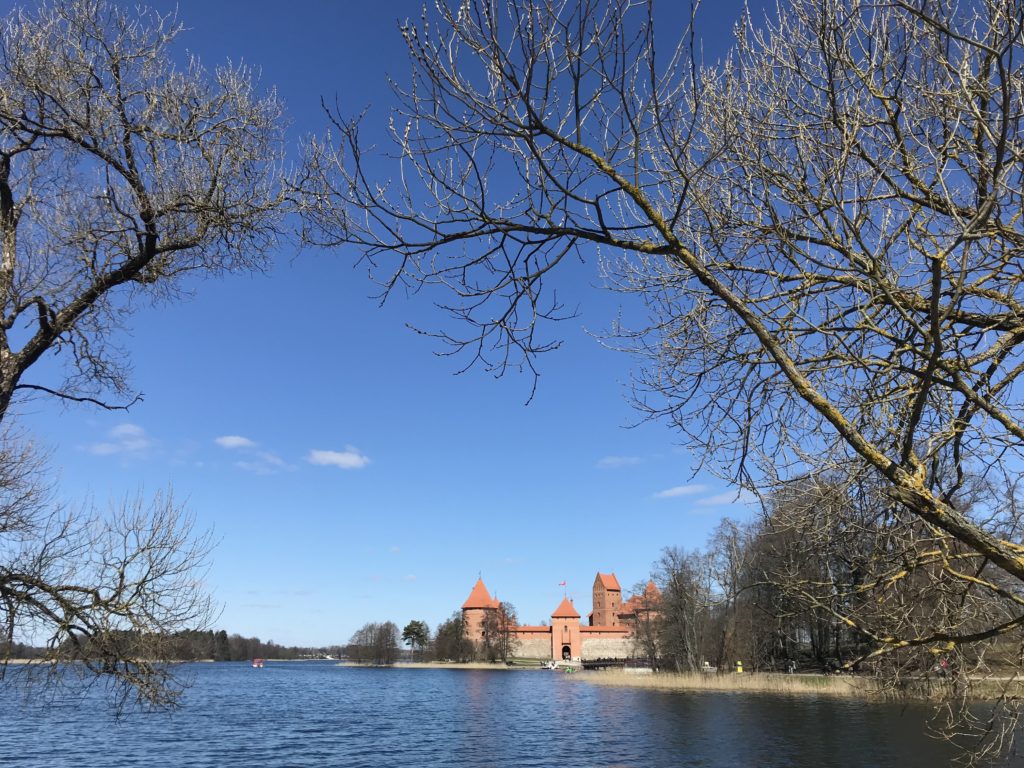 On the third day I went to the second-biggest city in Lithuania, Kaunas, which also served as the nation’s capital for from 1920-1940. Nestled between the country’s two largest rivers, the Neris and the Nemunas, the ruins of Kaunas castle sits at their meeting point. The best part of Kaunas was walking down the long main street, cobblestones beneath your feet and the aroma of coffee in the air as you pass by its many cafés. 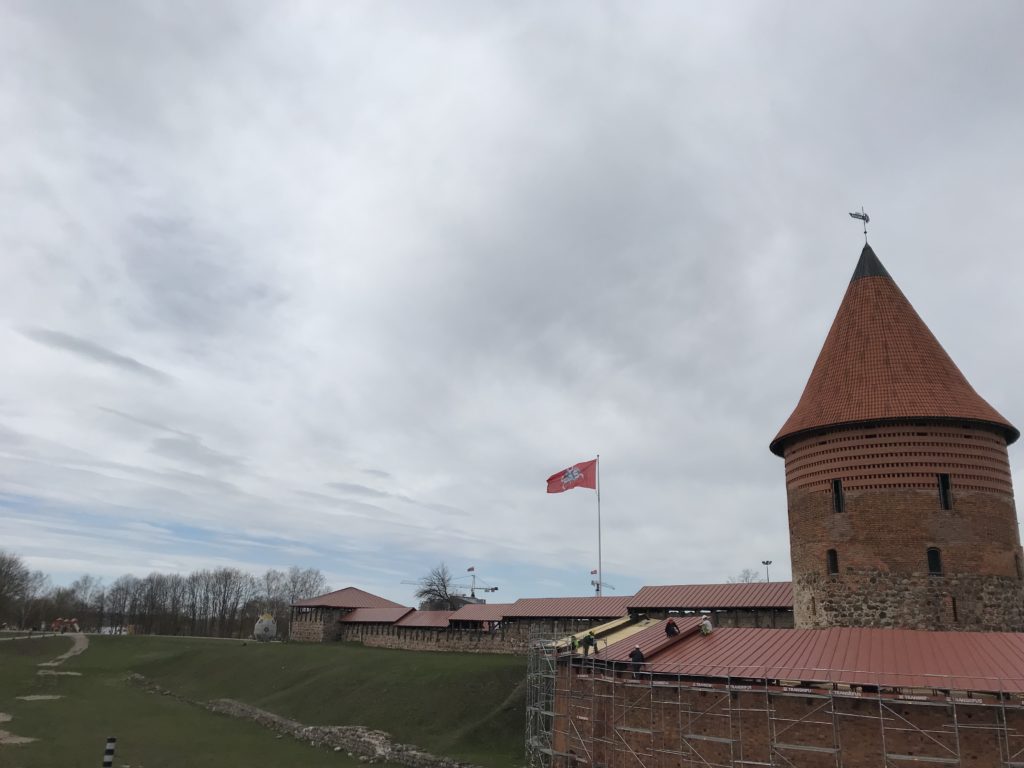 By now you might be thinking—she hasn’t visited any art museums yet, and she loves them!—and you would be correct. The Vilnius Picture Gallery, featuring a vast collection from the 1800s and 1900s, as well as a special exhibit of Vilnius through the 1940s and 1950s, made for a perfect visit the morning of my last day (really a half day) there. Add that to the Writer’s Wall, an art project dedicated to literature of many different countries, and a bagel café that had delicious lattes, and my day was set. 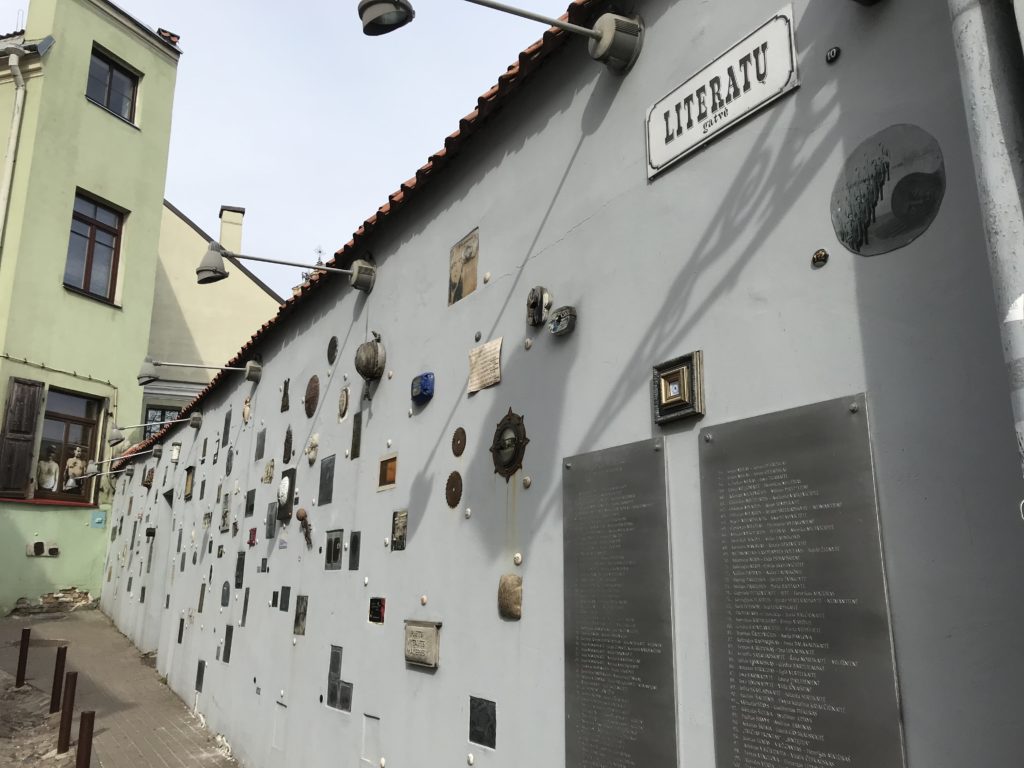 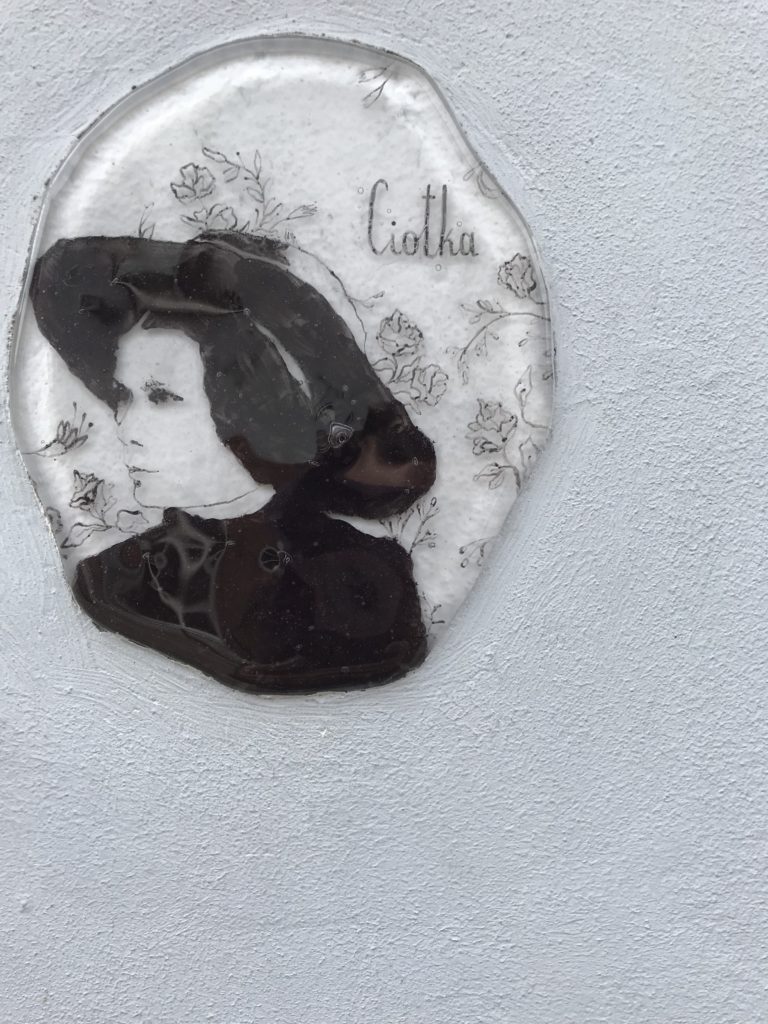 Another notable detail about Vilnius is its nickname of “the city of churches” and one could easily see why: it was hard to walk for five minutes without seeing one, be it the grand cathedral with its enormous white pillars, or the many Catholic and Orthodox churches with their bright colors and elegant presence. There is also one synagogue, the last left standing after years of suffering and strife. 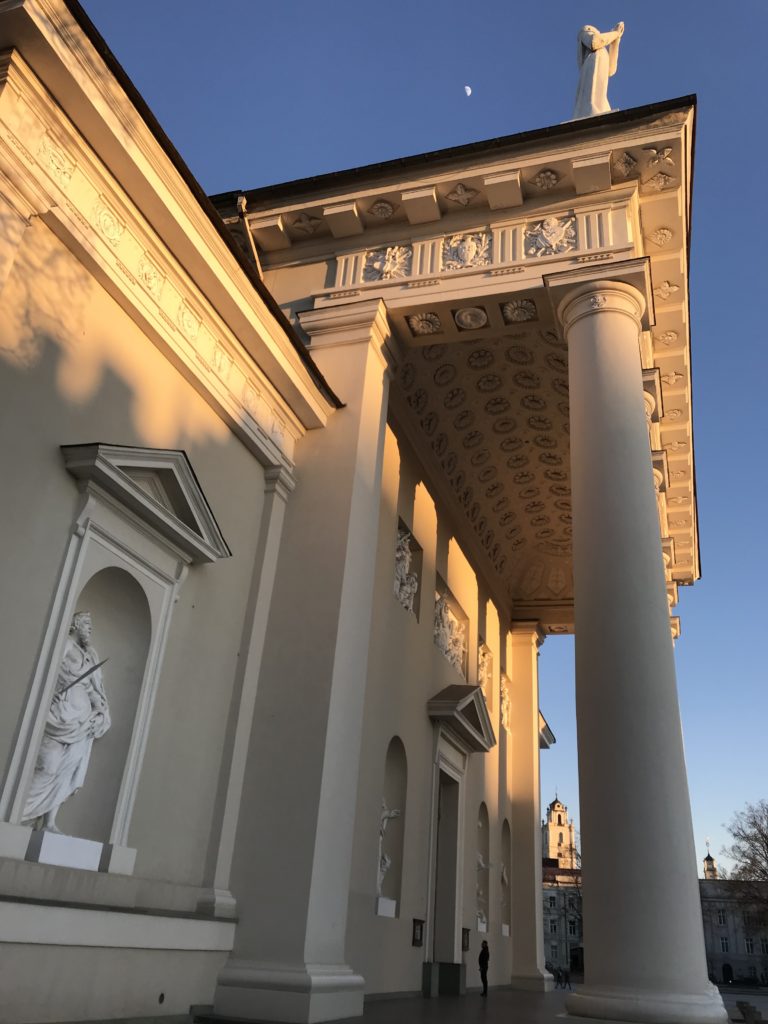 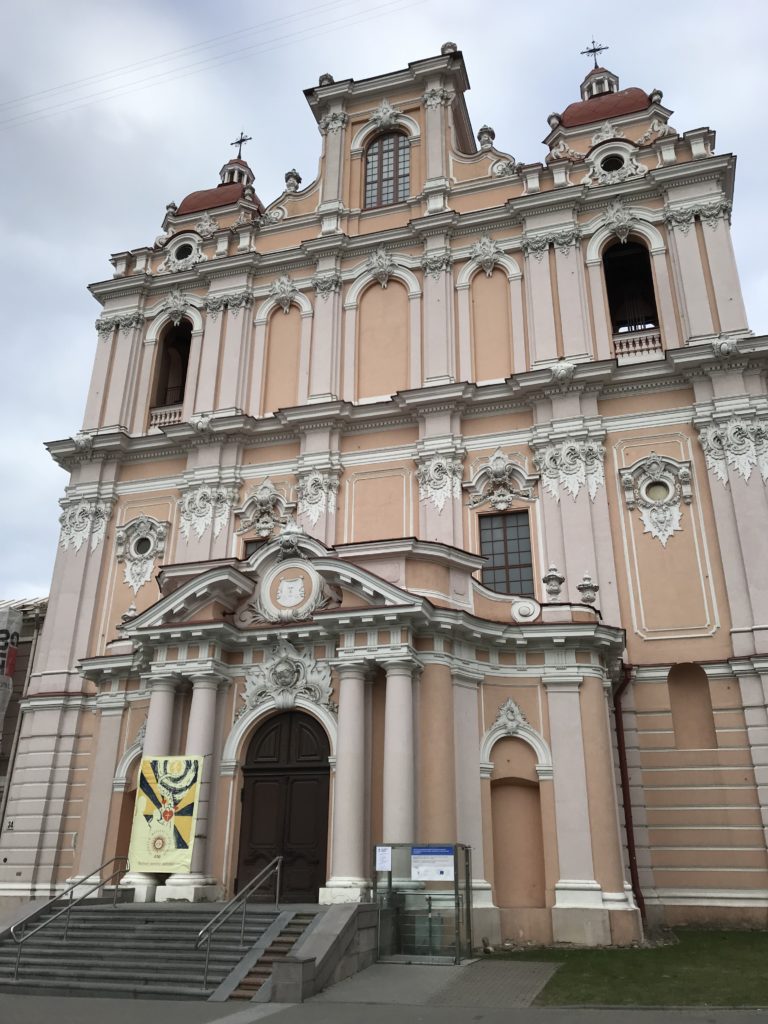 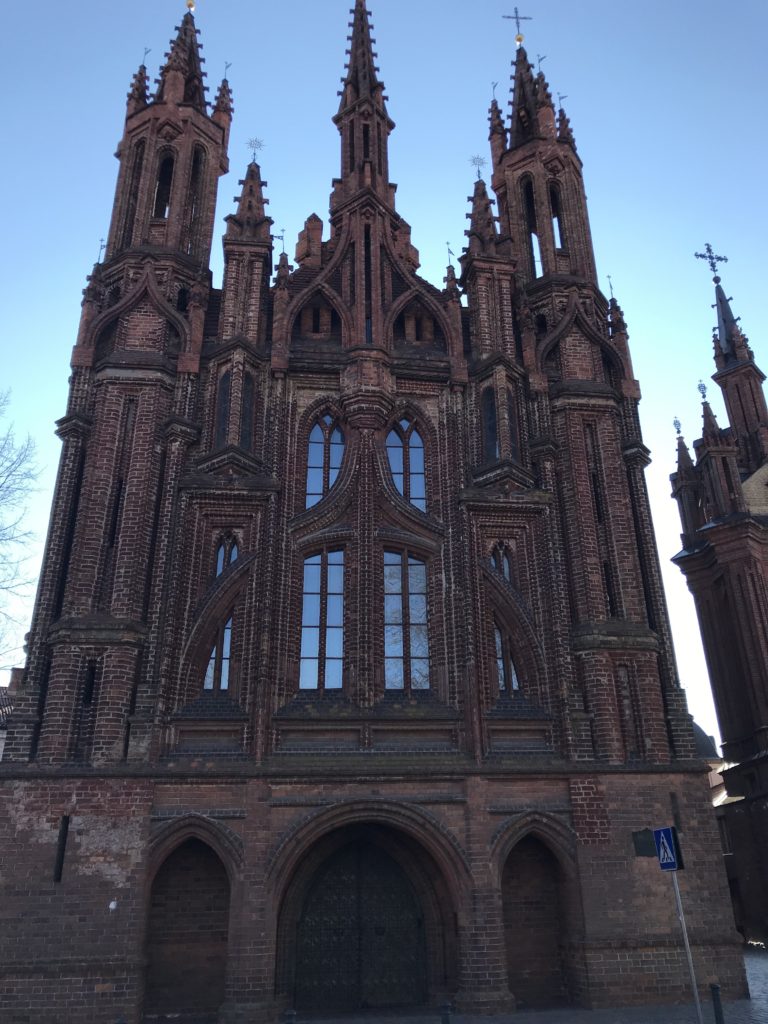 All in all, Lithuania made for a wonderful trip, with friendly locals who spoke excellent English, sunny, enjoyable weather, and a topnotch choice of sights to take in. An excellent decision for my 39th country—stay tuned for my next trip, less than a month away! And for the record, my obnoxious counting will stop for a while after hitting number 40; there’s something about hitting a nice round number that gets one pretty excited!