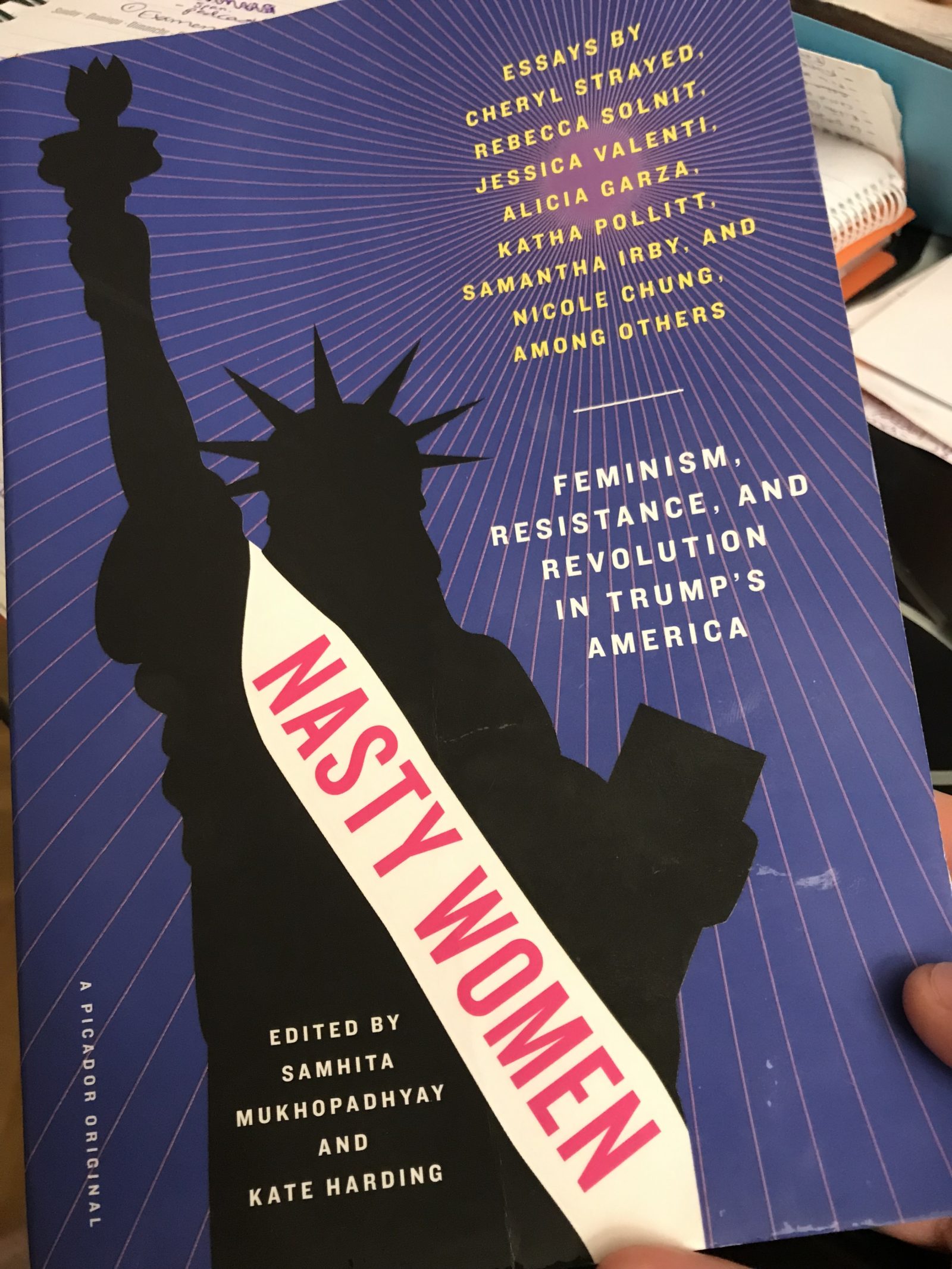 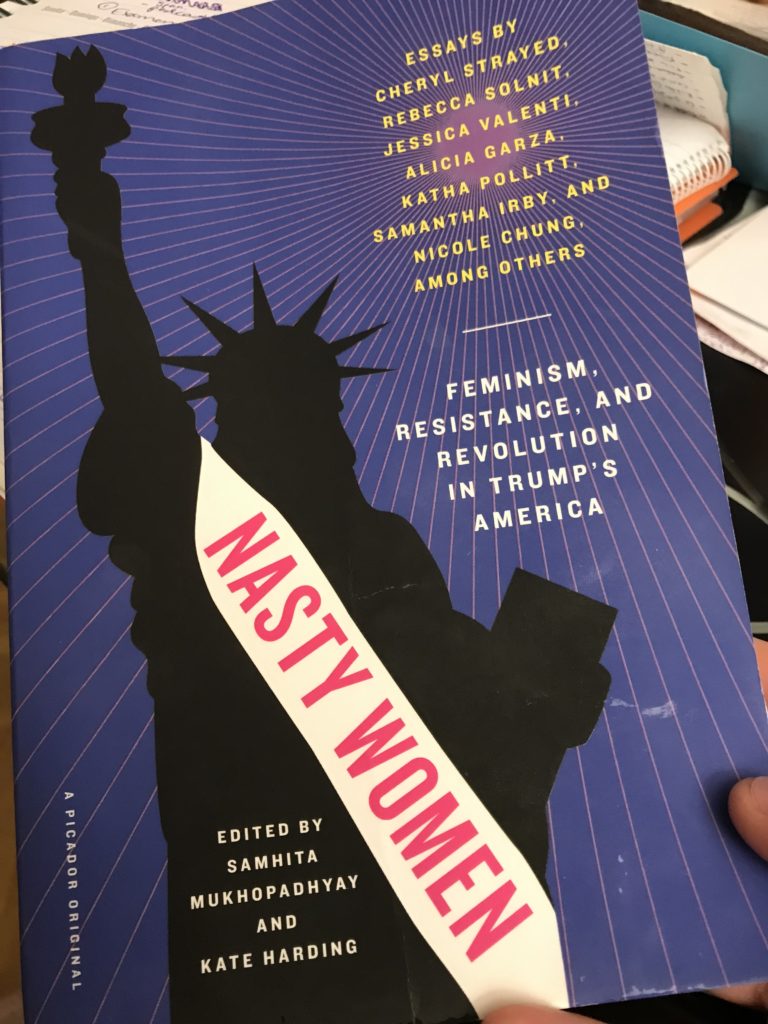 Every day I still feel the stunned, enraged sadness that I felt the first day I realized that the U.S. was more wickedly sexist than I had thought possible. The day that 63% of white men and 47% of white women decided that they would rather have any man—including a disgusting racist and sexist one—than the most qualified woman in history to be president. In my bones I should have known, but I got swept up in the idea that finally, finally women would be able to see ourselves represented. Finally our time had come. Ha, ha. You know how it goes.

Nasty Women: Feminism, Resistance, and Revolution and Trump’s America is a breath of fresh air. A collection of essays by some of my favorite writers (hello Cheryl Strayed!) and other fierce feminists, each writer reflects on her feelings before, during, and after, and focuses on how a specific part of their lives—be it LGBTQ issues, sexism, racism, etc.—ties into how they are affected by these oftentimes disgusting current events.

Below are some of the quotes I most identified with, which really helped me feel less alone.

Carina Chocano on why sexism cost Hillary the election: “We’re less familiar with the story of the righteously angry woman, the woman who wants to avenge wrongs, or aspires to power, or knows or says too much. We don’t know how to tell the story of a woman like Clinton—experienced, powerful, authoritative. Competent, entitled, outspoken women have always threatened the patriarchal structure because their very existence subverts it…One of the biggest ‘tells’ of women’s unique gender-based inequality is that our revolutions never result in women raking power, A powerful woman will always be attacked on one side for being powerful and on the other for being a woman.”

Cheryl Strayed with her usual wisdom: “Her defeat was personal to me. This election wasn’t simply a political contest. It was a referendum on how much America still hates women.”

Kera Bolonik on Fascism: “I’m not shocked that we’ve arrived at this place. For so many communities this has always been America—if you’re black, or Muslim, or Latinx, or an immigrant. Or a woman. Or LGBTQ. Because we as a nation have never reckoned with out white Christian male supremacy, the stage has been set for the current racist-in-chief (/traitor/rapist/grafter/pathological liar/illiterate sociopathic narcissist) to come along. But just because many of us know how it happened doesn’t make it any less frightening.”

Kate Harding on the U.S.’s ugly past: “If you’re an intellectually honest American, at some point you have to find a way to live with the knowledge that this country was founded on genocide, slavery, and misogyny. Every majestic national park was stolen from a murdered and exiled people. Some of our most beautiful historic buildings were constructed by the hands of human beings brought here in bondage. Nearly every “Great Man” we celebrate was raised by a woman working for free, then married to another woman who kept his house and raised his kids for free. This is the America we all know.”

Sarah Michael Hollenbeck on being an angry, radical activist: “Every day since election day, I wake up an angrier, more radical activist, forced to see the floor for what it really is…I feel a responsibility to be a better caretaker for the humans who are already here. Those of us can and must stand up for most vulnerable among us: the black, the brown, the refugee, the queer and the trans, the people with disabilities, and so many others whose lives are at risk.”

Jamia Wilson on the farce that is the American Dream: “While I’ve always known deep down that people can’t prove themselves into liberation, overstriving provided me with a sense of control and energy that distracted me from feeling helpless against the clutches of institutional obstacles…I realized that the pursuit of the so-called American Dream was futile for those of us for whom it was not designed to serve.”

Nicole Chung on maintaining relationships: “Trump’s election has made me wonder if it’s possible to have honest, sustainable relationships with those who look at him and want to see politics as usual; who look at the widespread resistance to his policies and see mere partisanship…How many people were expecting to remain in my life, I wondered, after choosing to vote against me, against my family, against my children’s future?”

And finally, Meredith Talusan on being transgender in Trump’s America: “We must interrupt, otherwise it’s too easy for us to be ignored. We must take the mic when other people exclude us. We must take to the streets not merely to chant and make ourselves feel better, but to risk and anticipate confrontation…We must risk our safety, because it is only when we ourselves are unsafe that those in power can truly fear us.”

I hope they help you, too.

2 thoughts on “Nasty Women: the Essay Collection I Should Have Read a Year (or Two) Ago”