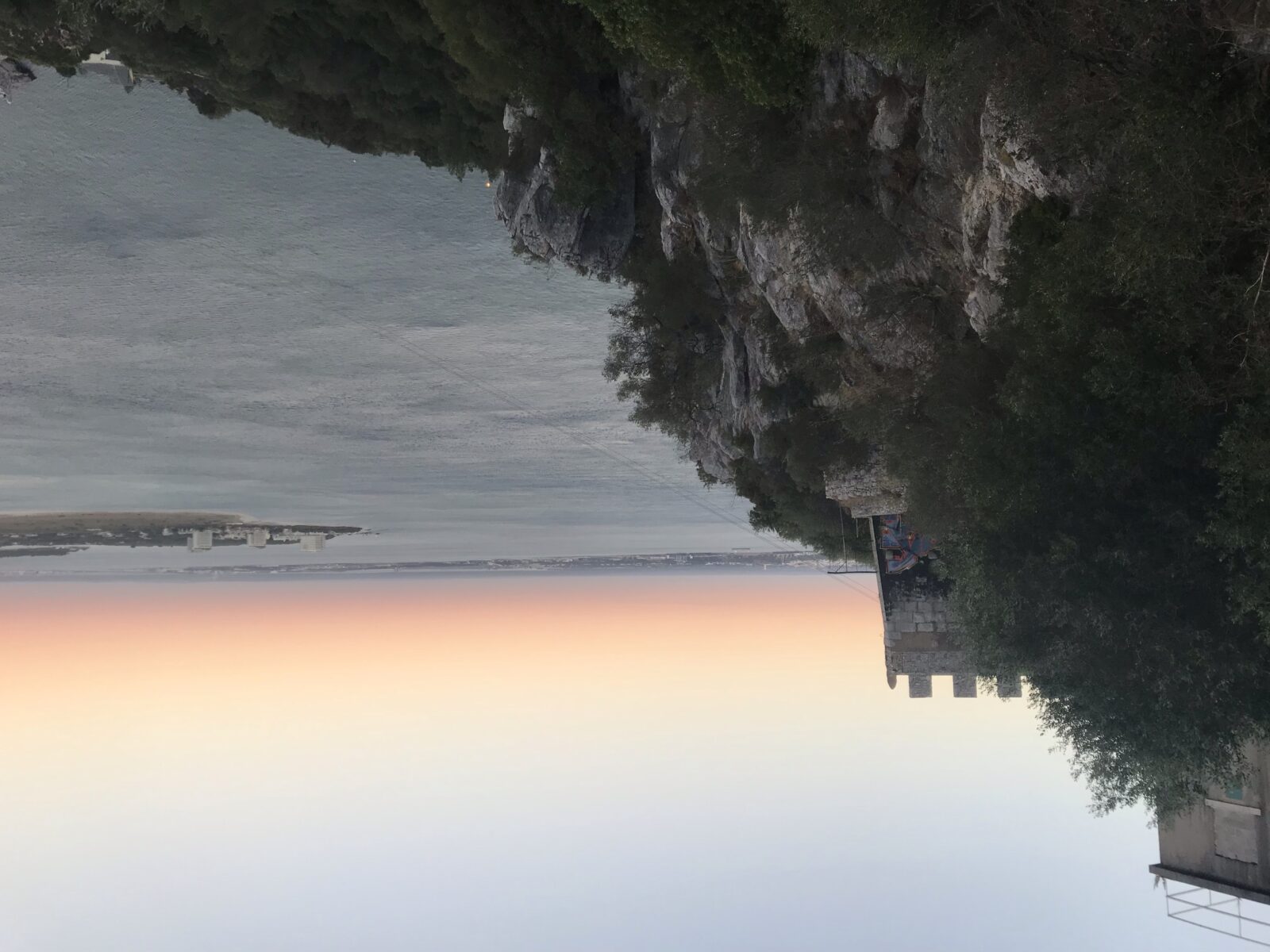 I don’t even think I need to mention why it was deemed necessary for this vacation to be ‘close’ to home; suffice it to say that I generally loathe traveling in the summer and make exceptions only for only-beach vacations, so this year was definitely an exception. A very necessary exception.

My husband and I started out in Portugal, visiting Lisbon, Sintra, Setúbal, and Évora. I wrote a previous post about Lisbon, which can be found here (I apologize in advance for my youth and general inexperience in all aspects—haha!) after visiting for the first time in December 2012. In addition to visiting the popular spots, such as the Torre de Belém, the Praça do Comércio (the main square), the Jerónimos Monasery, and Santa Justa Elevator, we also went to some places that I missed the first time around, including the National Tile Museum (tile is a national tradition in Portugal, see my photos below!), Pink Street for a coffee, and Bertrand, to browse for books in the oldest bookstore in the world (established 1732). We also took in a beautiful view of Lisbon from the Miradouro da Graça, one of several look-out points in the city; this one was close to where we were staying. 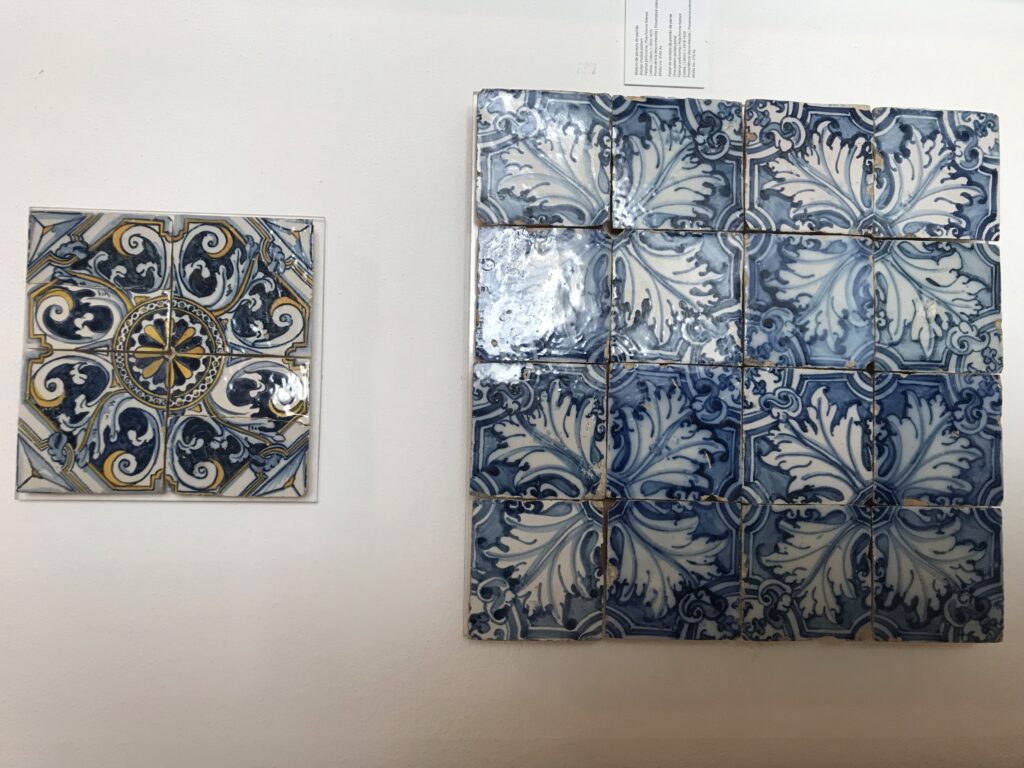 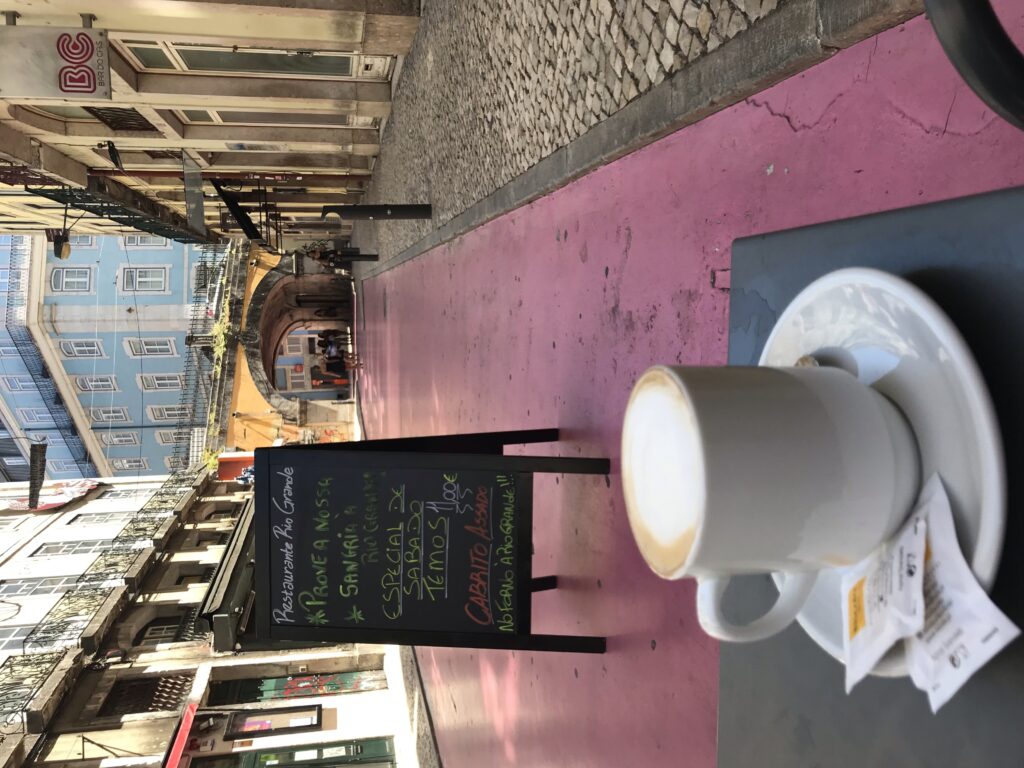 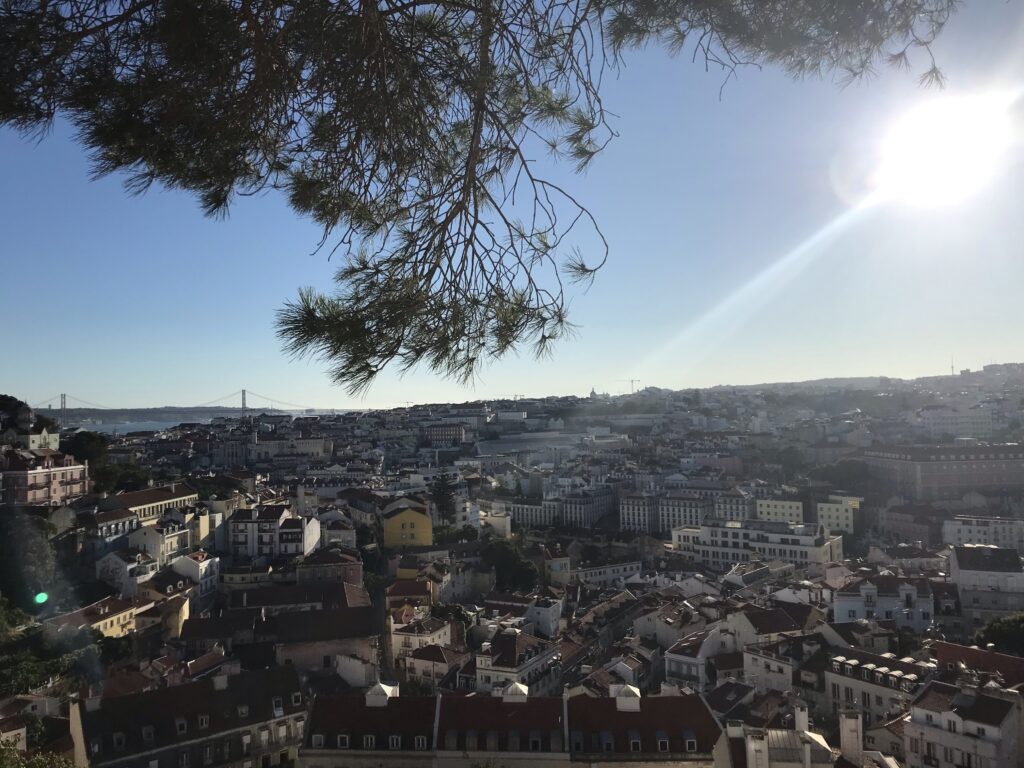 A short drive from Lisbon, the city of Sintra is a popular day trip, known for its numerous palaces and castles, all located atop hills overlooking the city. We started with grandiose, red and yellow Pena Palace, walking right in to start our visit. What we didn’t realize was that in ‘normal’ times, especially in the summer, you normally would have to queue for an hour or more. One of the advantages of traveling in these wild times, I suppose. From there we continued on to the Moorish Castle. Both of these sites offered spectacular views of not only the surrounding area, but also of each other, as can be seen from the pictures below. After sampling the local pastry, called travesseiros, a light, sugary pastry in the shape of a pillow, hence their name (travesseiro means pillow in Portuguese), we trekked back up to visit the Quinta da Regaleira, which is famous for its underground tower, which you can walk up and down thanks to its many stairs. The grounds themselves are beautiful, filled with fountains and trees and many flowers, and would have been a nice place to enjoy the whole afternoon with a picnic. Alas, we had more things to see. Maybe next time 😉 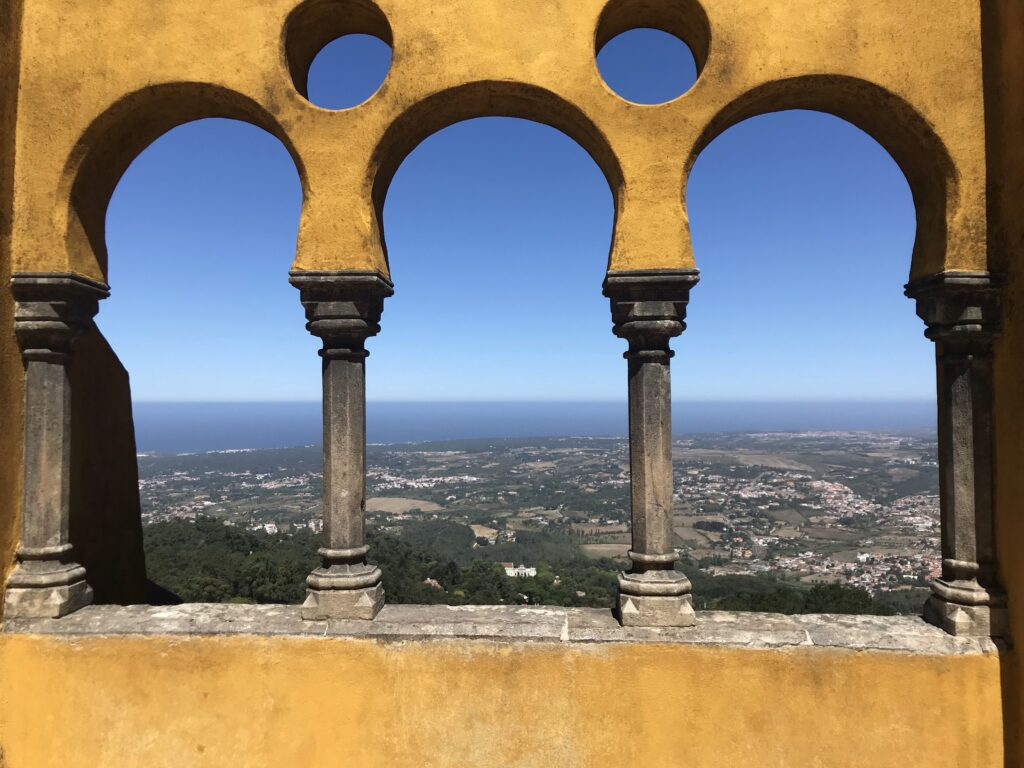 Our last stop for the day was Cabo da Roca, which is the westernmost point of Europe and only a half drive from Sintra. It was a quick visit, as there isn’t much to see besides the monument and the sea, but well worth it. This had to be the most exhausting day of our trip, hands down.

Next we went to Setúbal, which, while not very touristy, definitely should be, mainly because of the many spectacular beaches nearby. There is, of course, the city beach of Setúbal, but also the beaches of Arrábida, a big hill that you ascend from one direction and descend from another in order to access the beaches, and finally, the Troia peninsula. We took a short ferry ride (with the car!) over to the peninsula, enjoying its white sandy beaches and freezing water (no joke). There are also quite a few excellent locations to watch the sunset, including the São Filipe Fort, which also has a café, and the 7th Bataria, which is actually quite abandoned, but makes for picturesque photos (see below). 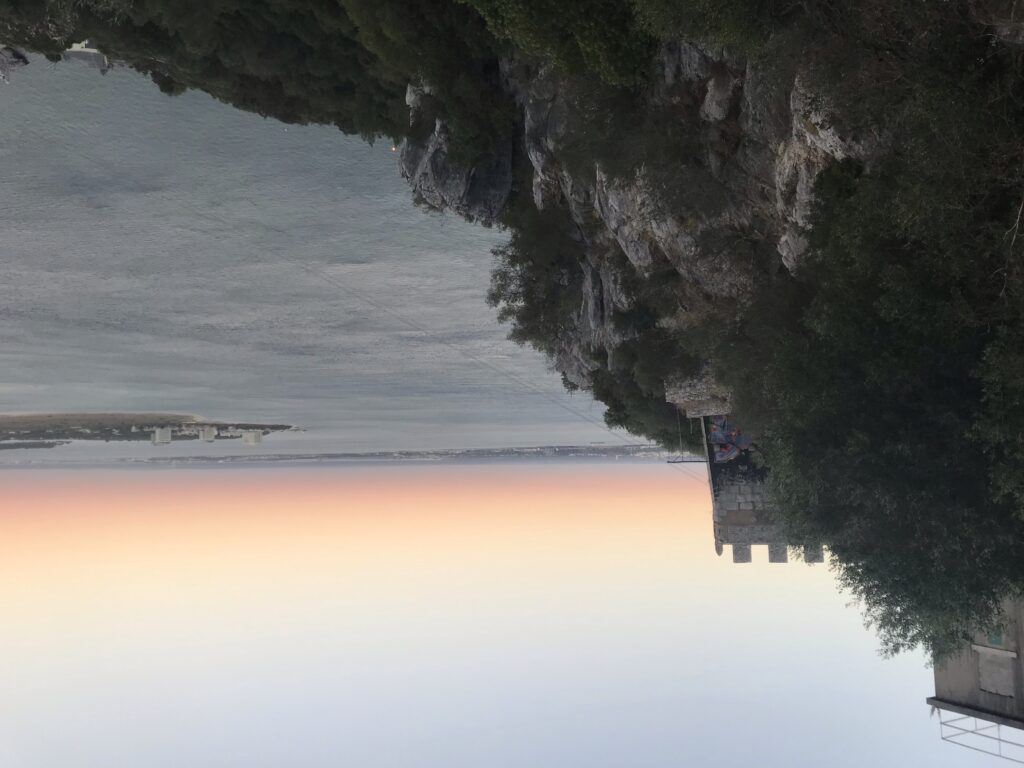 The final stop in Portugal before heading back to Spain was Évora, a World Heritage City and also baking hot in the summer (100+ degrees). We spent the better part of a morning exploring, starting at the Chapel of Bones, which used the bones of hundreds of people for its walls and ceiling, and continuing on to the Praça de Giralda, the ancient Roman temple ruins, and the museum of the city, a part-art part-sculpture museum that offered relief from the heat as one of its benefits. On our way out of the city, we visited the Almendros Cromlech, a Stonehenge-like structure of over 100 large, circular rocks, which, with the proper marketing, could indeed be the next Stonehenge.

Part of the reason I wanted to go to both Lisbon and Setúbal was to meet two of my Portuguese teachers who I have had classes with online for about two years, but had never met in person. [As most of you know, my job and my language learning are both tied to online learning, and there is no doubt in my mind that this is the way of the future. If you want to try italki for language classes, send me a message for a discount code!]

So that was the first half of our ‘close to home’ vacation. We headed back to Spain to truly take some time to relax at the beach, in a city called Cádiz on the southern coast. Cádiz is a beautiful city in and of itself, and I would love to visit it again in a colder season, when you can wander around its historic city center—located on a small peninsula—for as long as you like without potentially sweating to death. With palm trees on either side, making for wonderfully symmetric pictures, Cádiz’s cathedral is magnificent, and a short walk away are the Tavira Tower (which we did go up to get a view of the city!) and the Castle of San Sebastián. There is another castle, which was a longer walk away, called the Castle of Santa Catalina Bastion, and next to that is a leafy green park. And of course La Caleta beach cannot be forgotten!

A nice day trip from Cádiz is Jerez de la Frontera, known for its sherry and horse riding competitions, but if you’re not into either of those things (we sure aren’t!) there is still a beautiful cathedral and Alcázar, an old Moorish fort, which are right next to each other and make for a nice morning of tourism. We had a coffee in the main square and were on our way.

The final stop on our trip was Mérida, a city known for its many Roman ruins, including its theater and amphitheater (still used each summer for its theater festival), the museum of archaeology, the temple of Diana, a massive aqueduct, and the Alcazaba, another ancient Moorish fort.

Trips always go by too fast, and this one was no exception. I hope traveling can go back to normal as soon as possible; I am desperate to get going again! 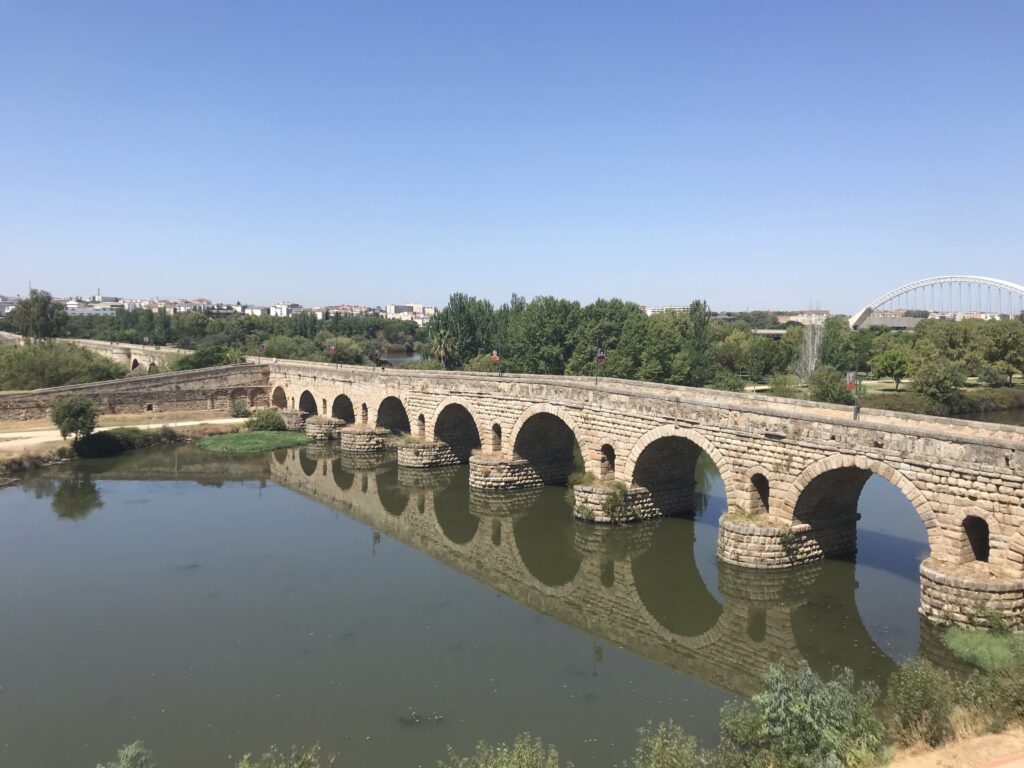