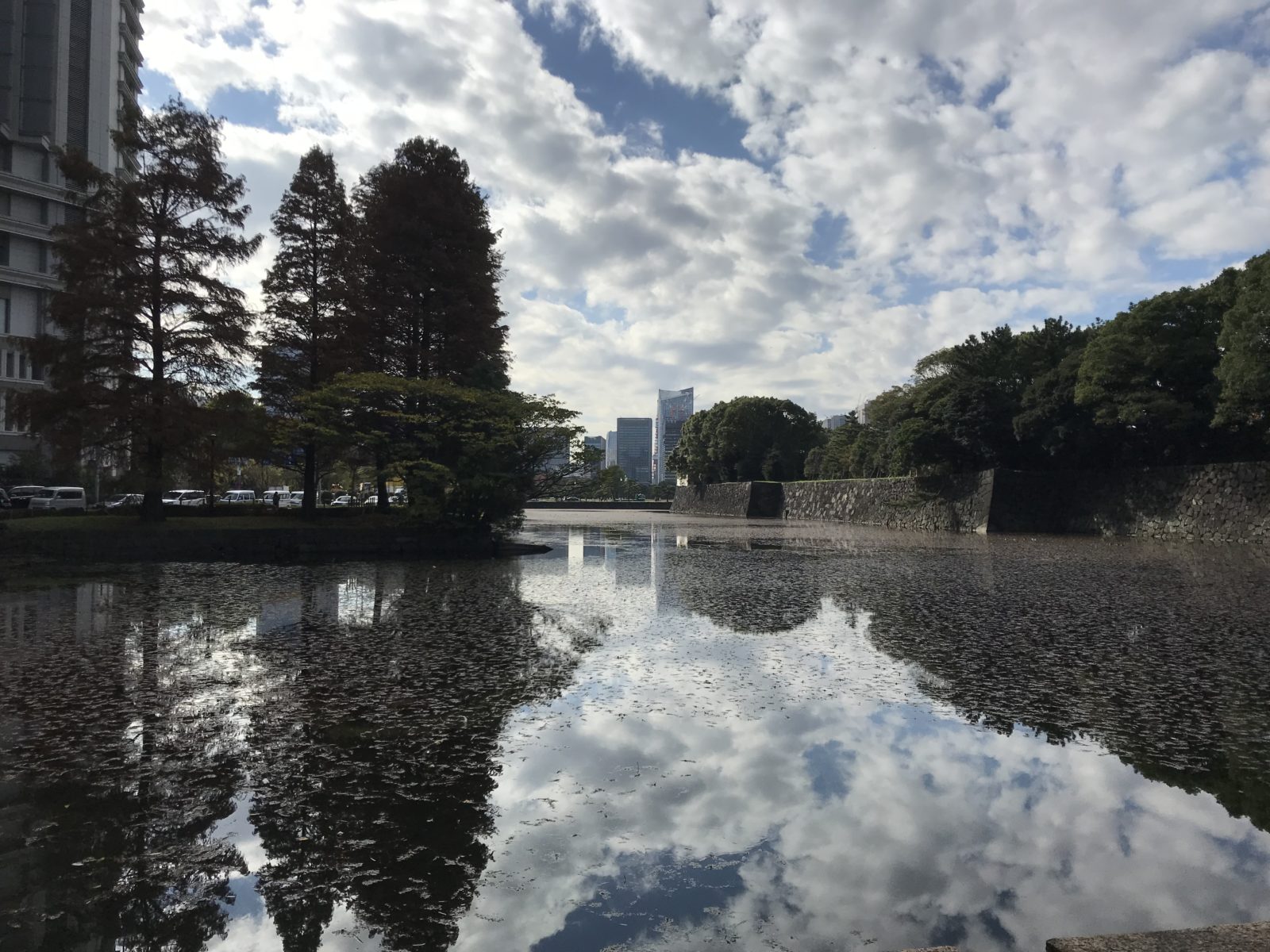 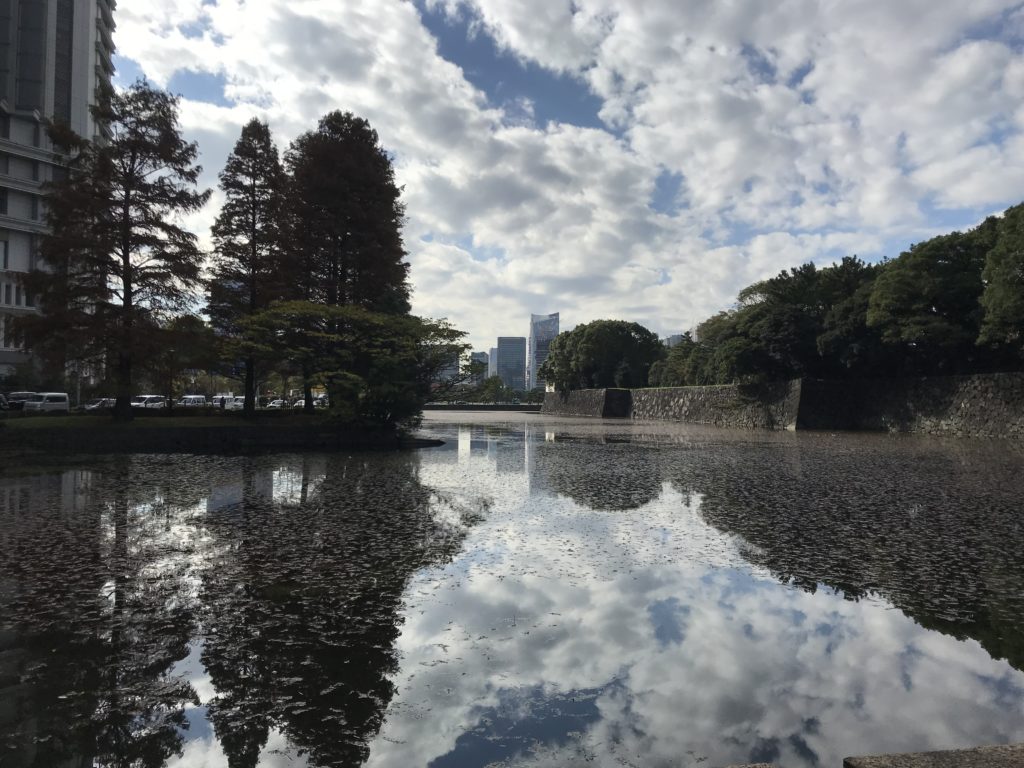 Since we returned from our honeymoon, I have been playing a long game of catch up, and the writing of this blog post means that I am (almost) all caught up! So yay for that. Instead of writing one long post, which would probably be thousands and thousands of word, like my travel journal was, I am dividing out trip into four different posts, basically based on the geography of Japan and the route we took.

So we flew into Tokyo Haneda International airport, which is much closer to the city center and therefore has easier access to it. First I will say that neither my husband nor I had ever been to Asia before, and we considered Japan a nice way of introduction to the continent. With a reputation for being polite and helpful to a fault, and knowing that we wouldn’t even be able to decipher street signs or restaurant menus (even though we did take a Japanese class just for the basics! Konichiwa!), Japan, although an excellent choice, was still extremely overwhelming.

From the metro trains being jammed with people—the video going around of a metro worker having to push the people into the trains so that everyone will fit is true (if you haven’t seen it, google it)—to the multitudes of people everywhere (imagine Black Friday crowds, but every day and everywhere you go), there is no other word I can choose besides overwhelming. Overwhelming usually has quite a negative connotation, and don’t get me wrong, I’m using it here with a negative connotation for sure, but not completely. There is definitely a sense of awe when you come up out of the metro and see dozens of skyscrapers with the Times Square-feel of billboards, etc. but in every single neighborhood you go to in Tokyo. For now I will move on to our itinerary, but there are tons of cultural differences that really stroke a chord with me (later I’ll tell you about the silence and politeness, which I think go hand in hand). 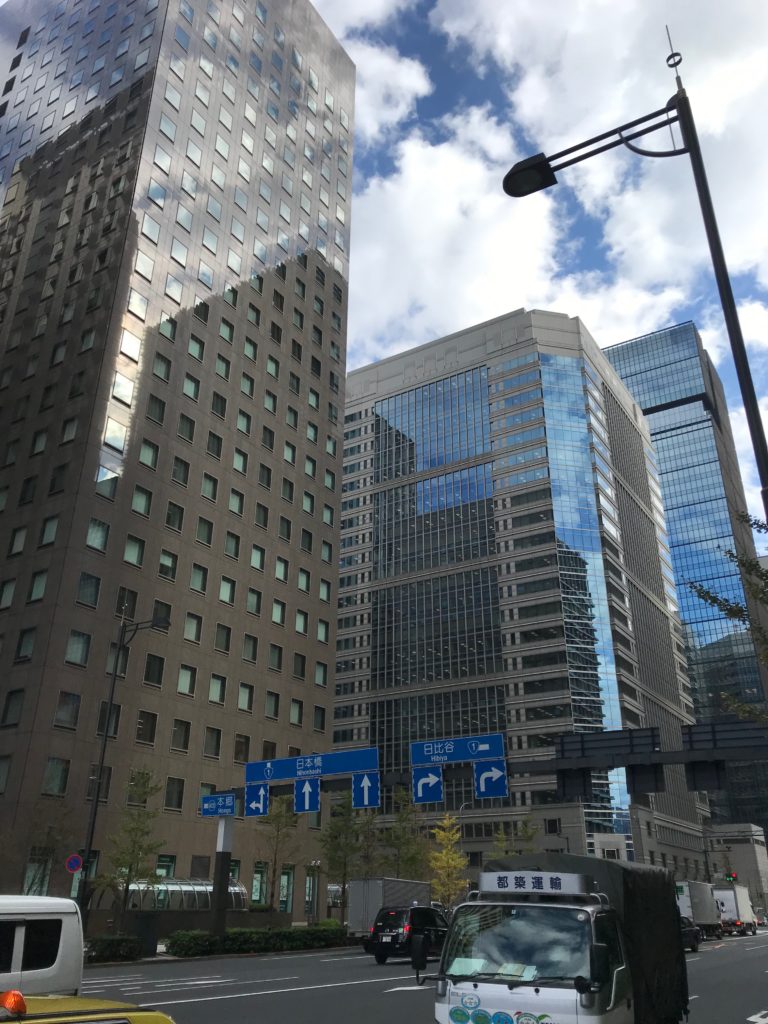 We decided on three full days for Tokyo, although you could spend at least a week depending on your interests, and on our first full day in Tokyo, we started bright and early. Since we were there in November, the sun set around 4:30 pm, and the temples all opened at 6 am, so we were up and at ‘em by 6:30 am most days. For the record, I am not a morning person. At all. Tokyo is so big that it is essential to organize your schedule according to where everything is on the map. So our first stop was to the Yasukuni Shrine. Most of the temples and shrines we visited encompass much more than just the shrine itself; they also have gardens, statues, and treasure houses. The Yasukuni Shrine was close (close being a very relative term—it took us around 45 minutes to get form one place to another) to the Imperial Palace, so that was the next place we went to. Although the Imperial Palace didn’t have much to see in and of itself, it was nice to walk around and see the original watchtowers that are still standing. 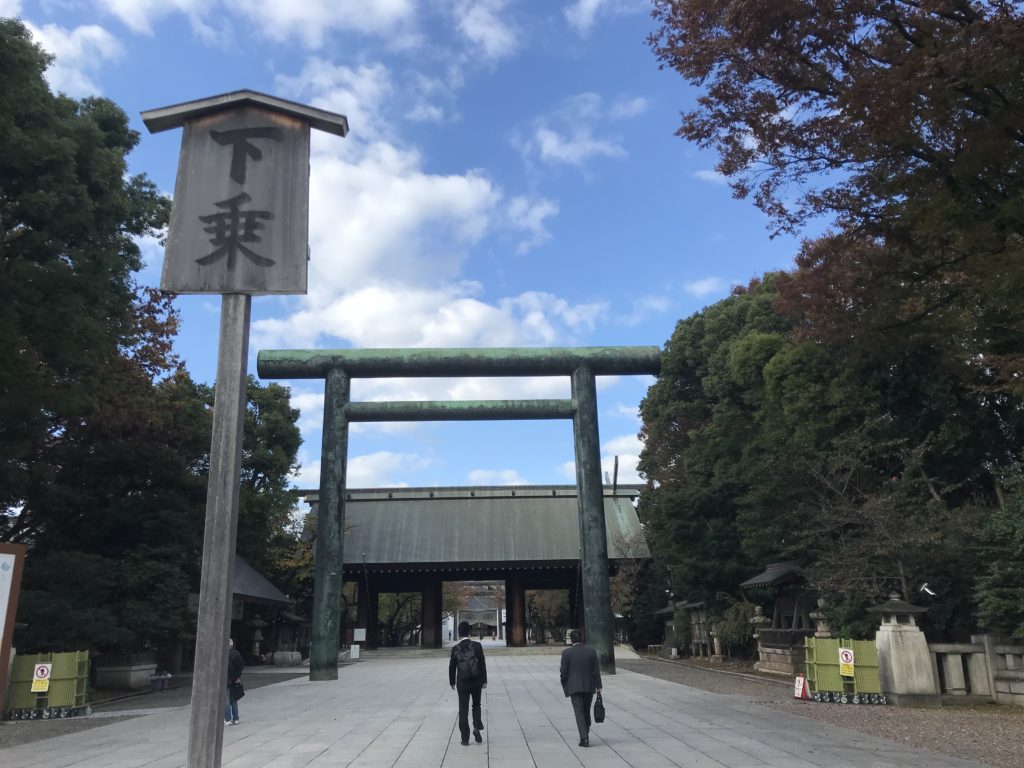 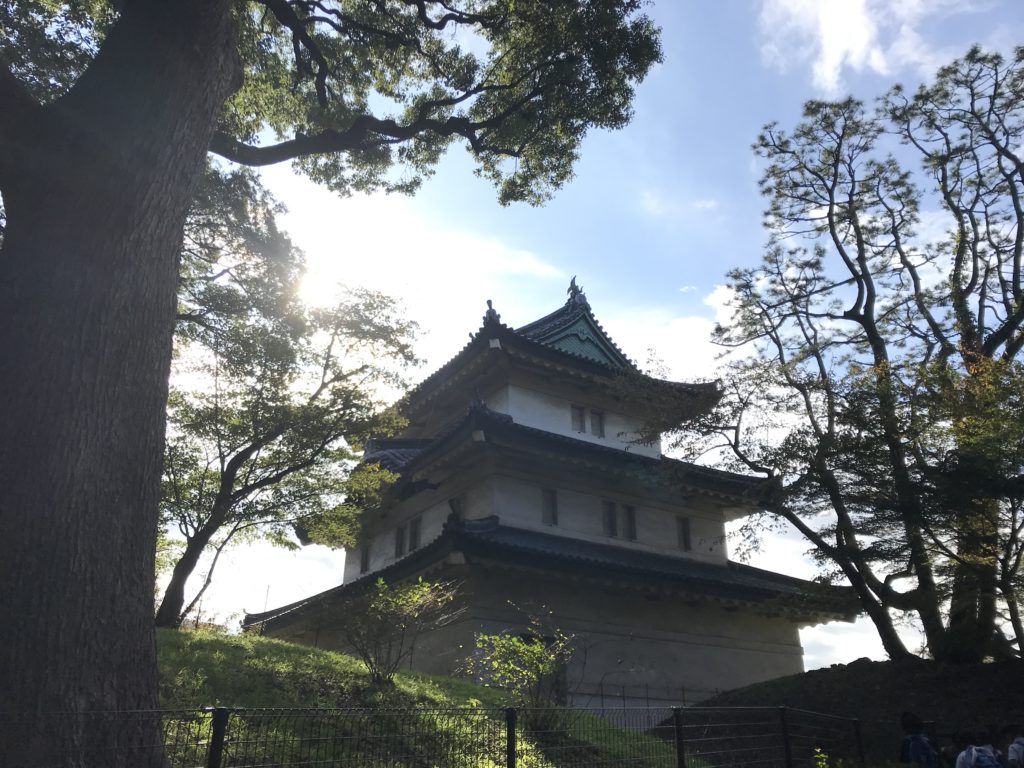 Next we went to the Zojo-ji Temple, an impressive complex at the top of about two dozen stairs, and located next to the Tokyo Tower, Japan’s red-and-white replica of the Eiffel Tower. The Tokyo Tower offers a nice view of the city, but it was around $15 a person so we decided to skip it in favor of a free view I will tell you about later on. Next stop was the Shinjuku Gyoen National Garden, known for its traditional Japanese gardens. With the fall colors reflecting on the water and the downright picturesque-ness of the garden itself, every garden we went to was marvelous. The last shrine for the day was the Meiji Shrine, less showy than the others but a popular tourist destination as could be seen from the crowds that were there when we visited. Next to the shrine was Yoyogi Park, where we sat for a bit to rest and recharge out batteries. 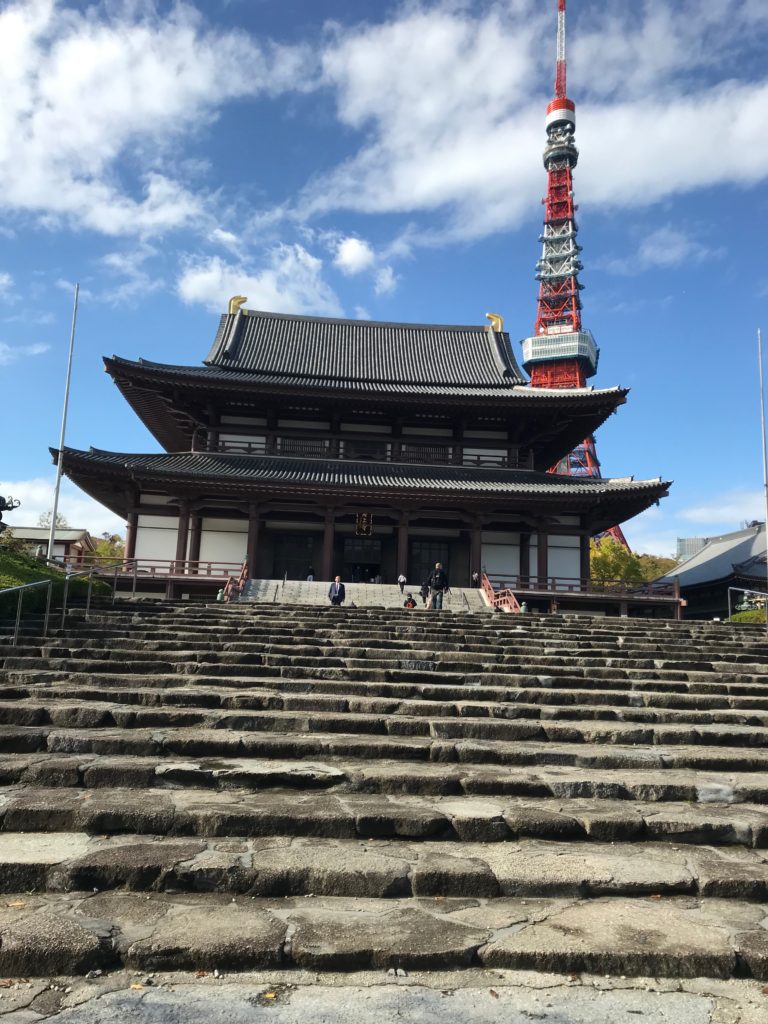 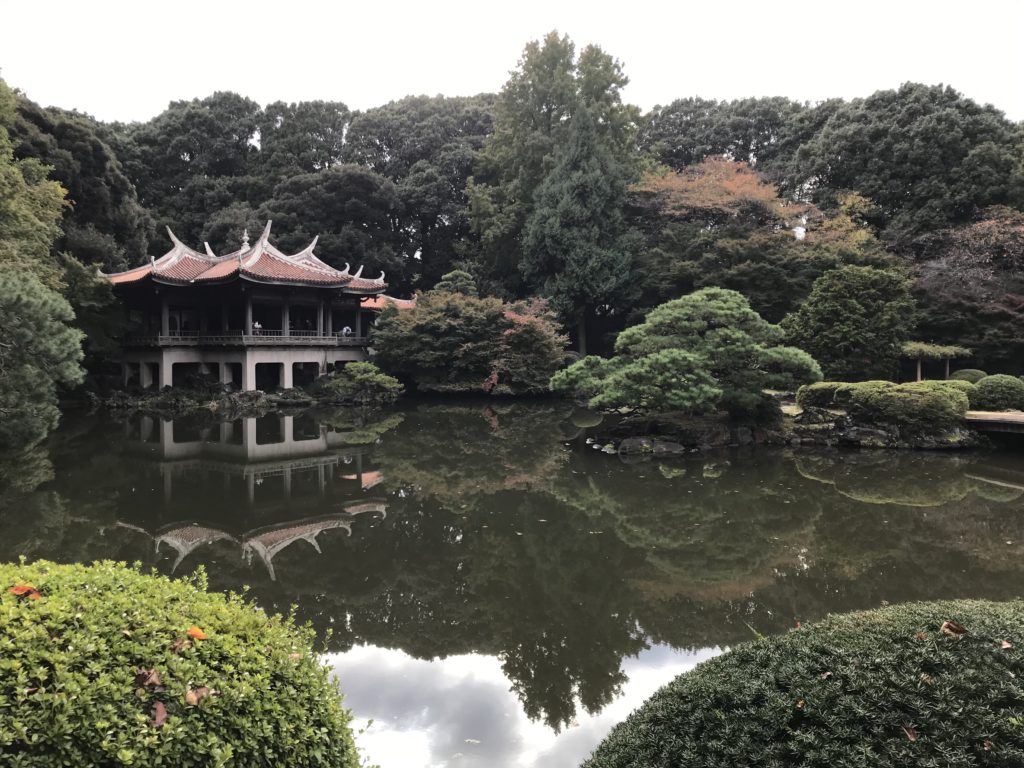 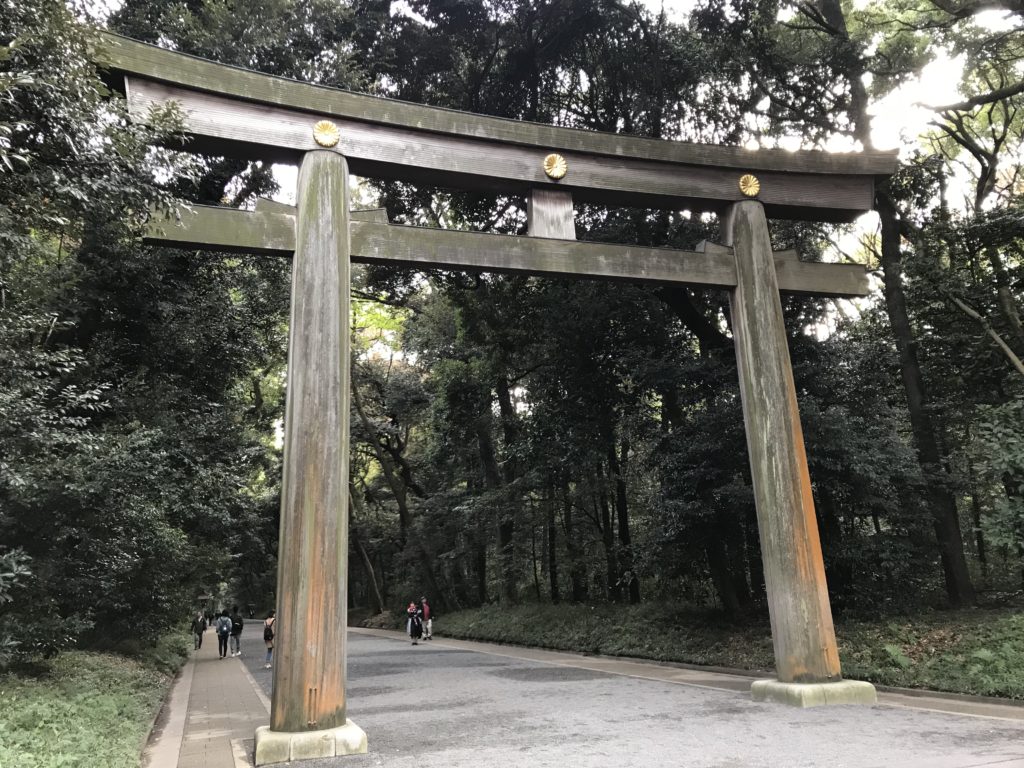 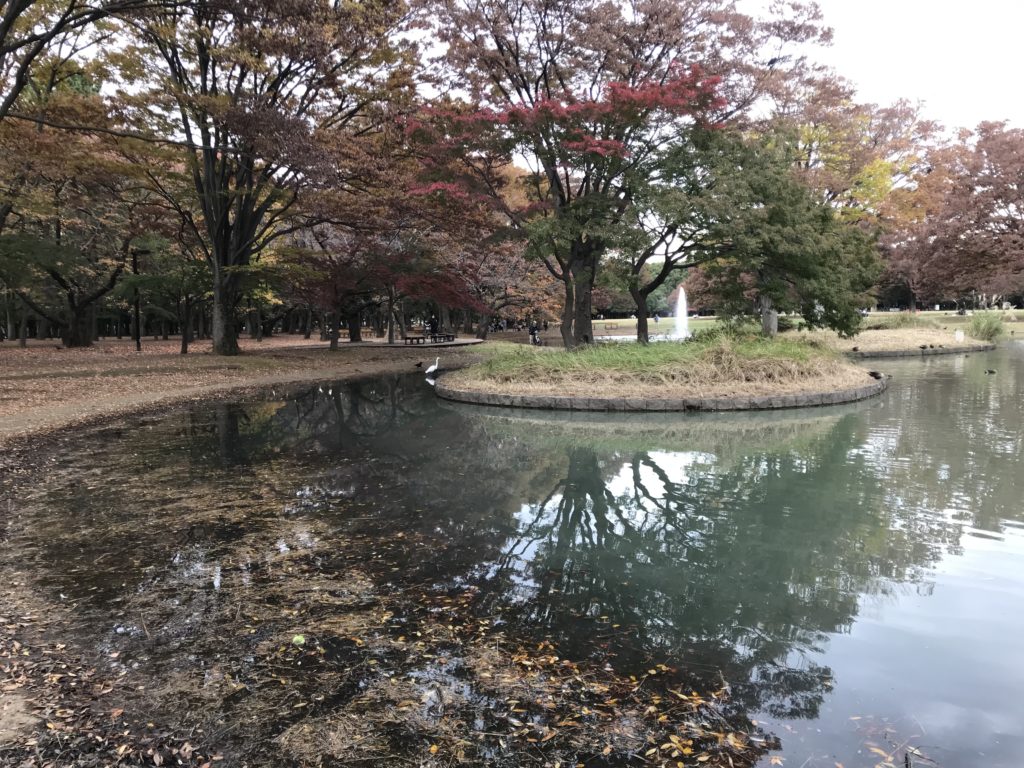 We then walked down Takeshita street eating crepes, and wandered over to Shibuya crossing to see the hundreds of people cross in all directions (without touching!) when the lights blinked green. By now it was getting dark, and we decided to head over to the Pokemón Mega Center. You knew we were fans, right? 😉 There were hundreds of Pokemón stuffed animals of all sizes, stickers, pencils and pens, towels, socks—anything you could imagine, that store had it! And come to find out, there are actually over a dozen of these stores all over the country, and even a Pokemón-themed café which I will tell you about later. 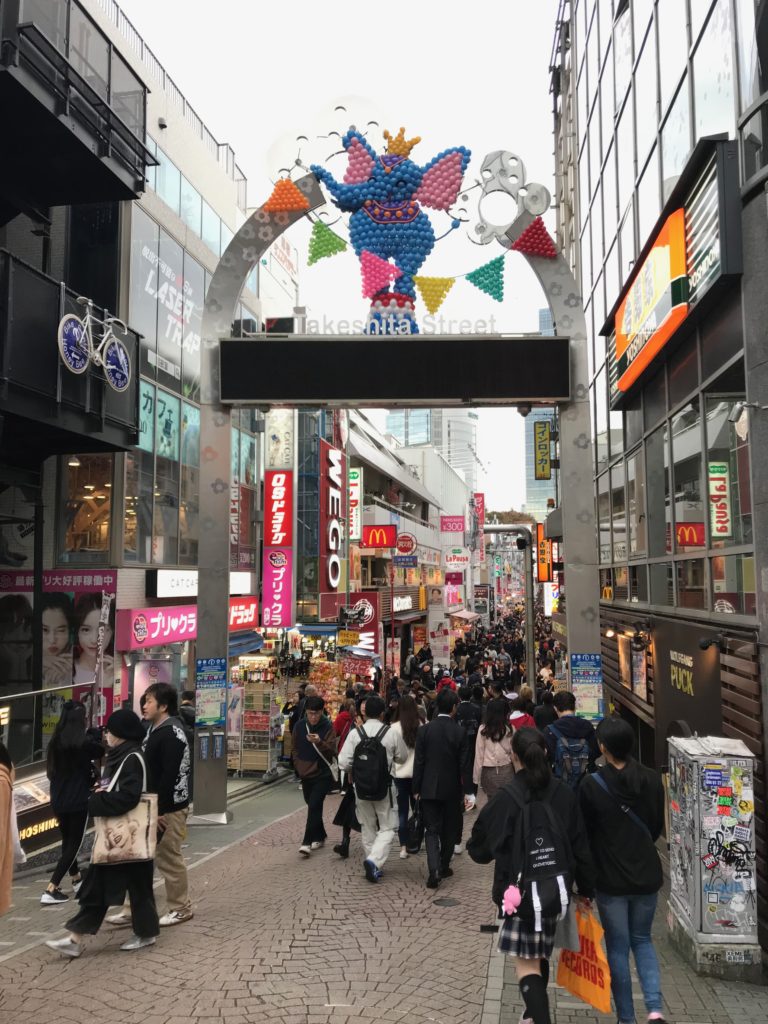 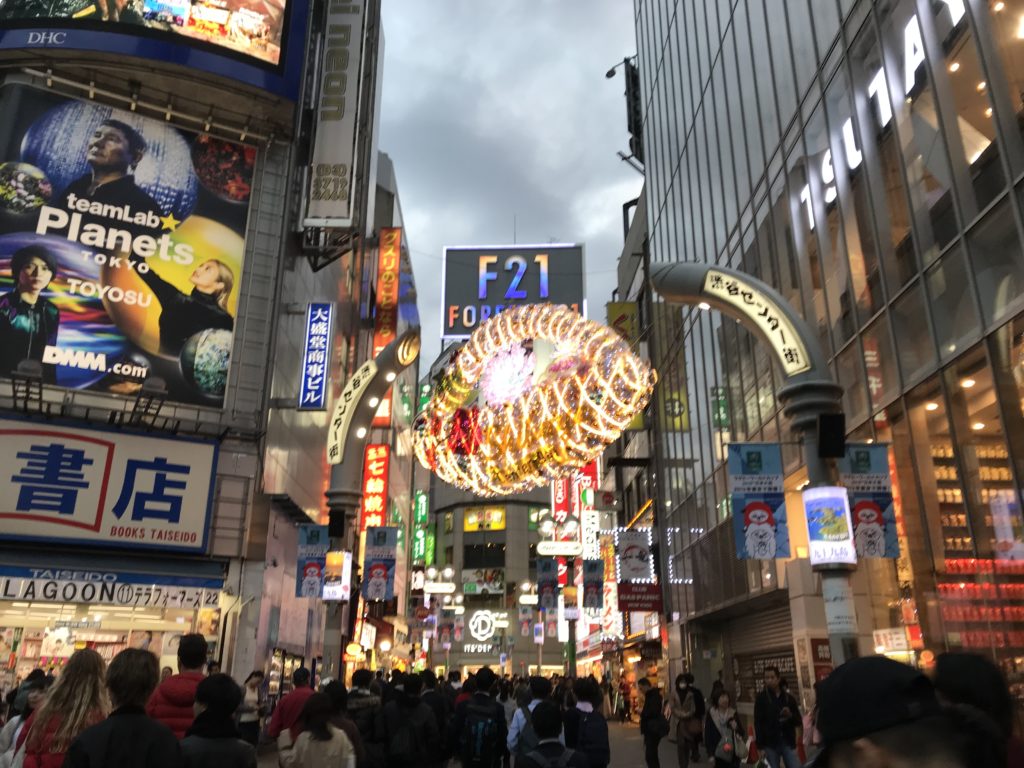 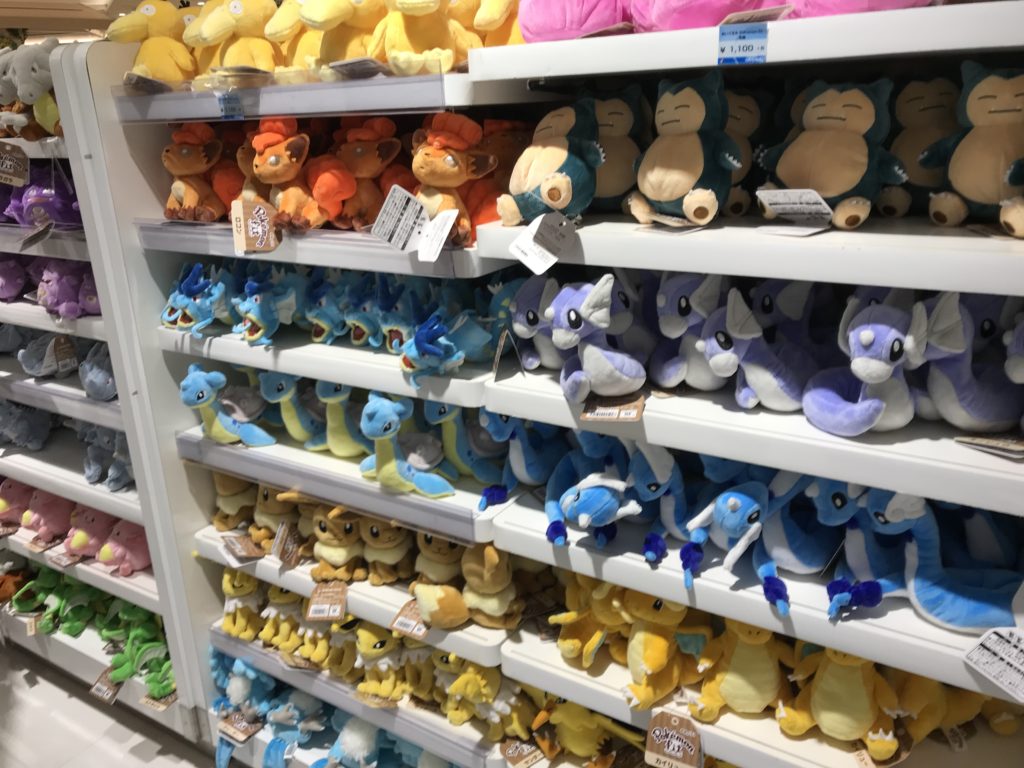 We finished the day with a 360-degree view of the city from the Metropolitan Government building, which was FREE. Yay! The building itself was beautiful, and the view, even though dark, showcased Tokyo’s city lights and was well worth it. 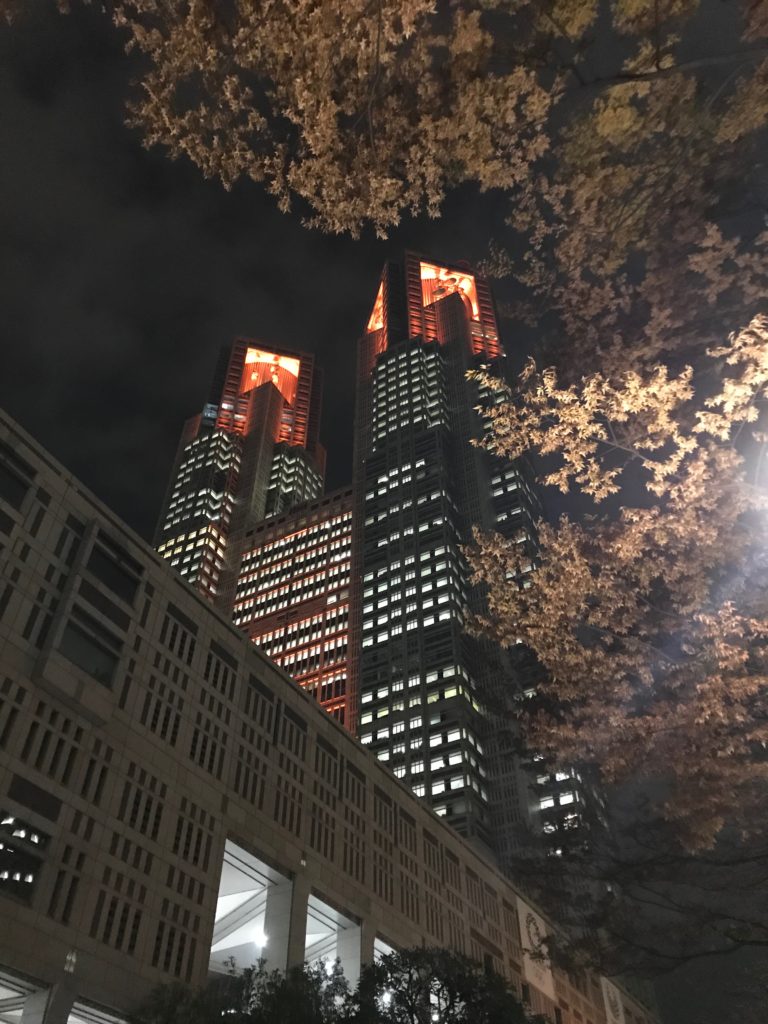 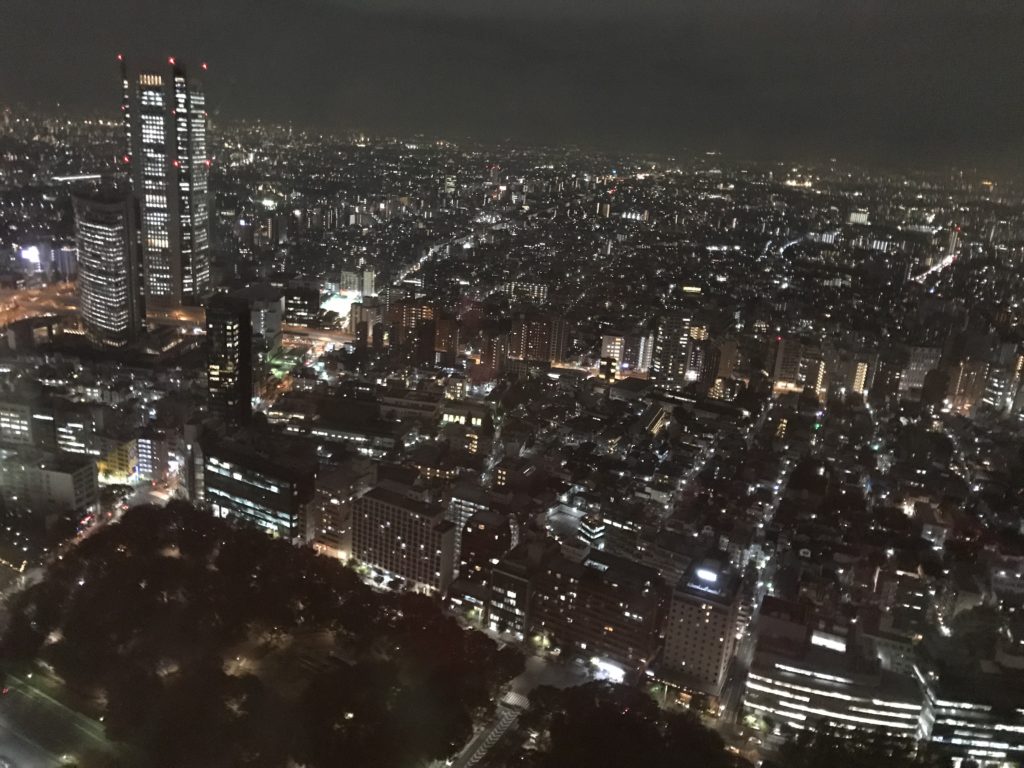 Since we knew we were coming back to Tokyo for our last day, we took a day trip to the city of Kamakura on our second day. Kamakura is known for having the largest metal statue of the Buddha in Japan, and it did not disappoint. You could even go up into the Buddha to see how it had been made. Cool! After meeting a group of Japanese students who wanted to take a picture with us (LOL new friends!) we continued on to the Hase-dera Temple, which had a nice view of the city and a smaller temple inside a cave. We also went to the Museum of Literature, but alas, there was not a word of information in English, so that was a quick visit. 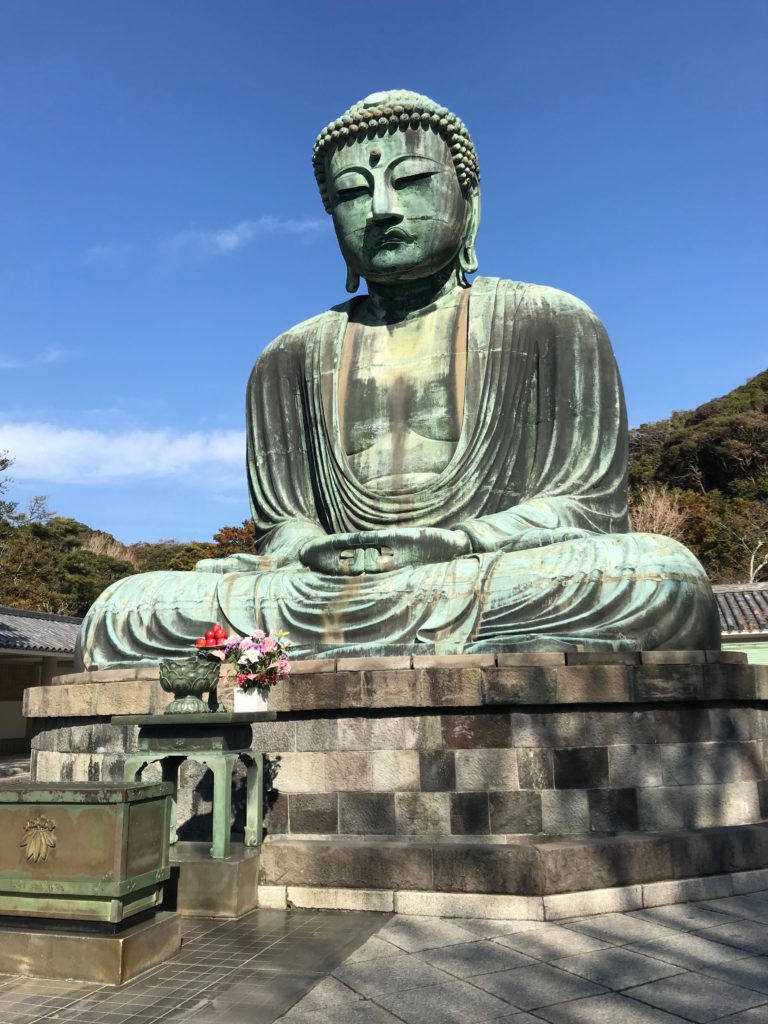 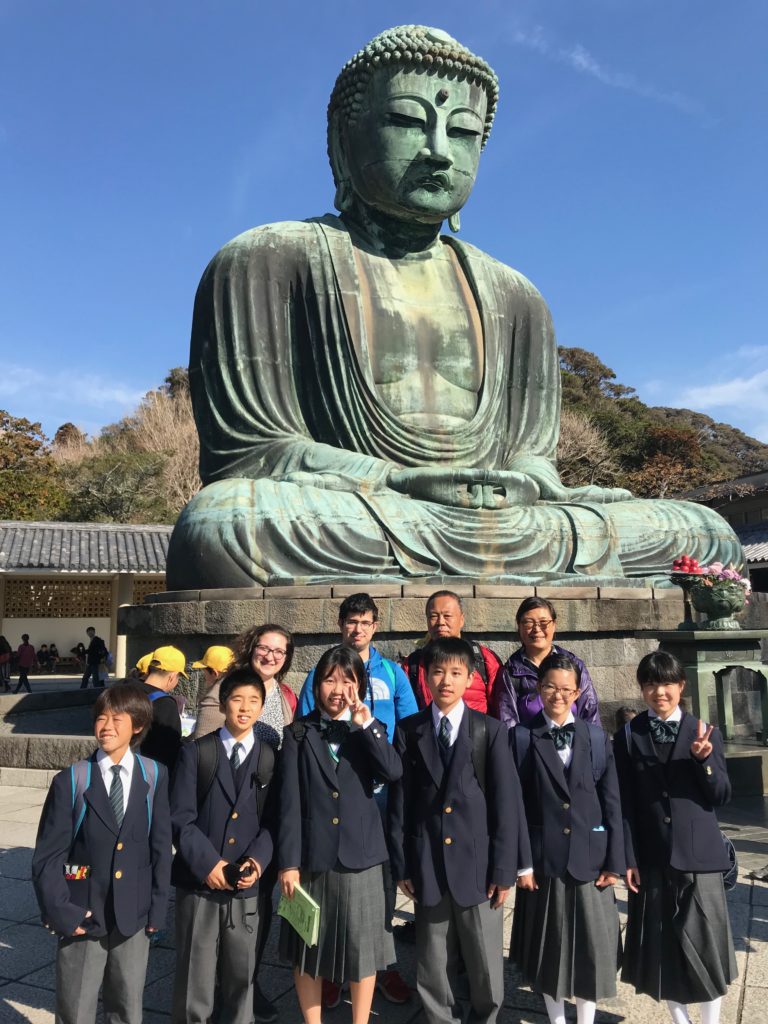 Our last stop in Kamakura was a walk down the touristy main street, where I ate ramen in the oldest ramen shop in Kamakura (it literally had four seats in it), on our way to the Tsurugaoka Hachimangü Shrine, another huge complex consisting of museums, a large garden with a pond, and the temple itself. Among other things, we saw women dressed as geishas touring the temple and stacks of beer kegs. 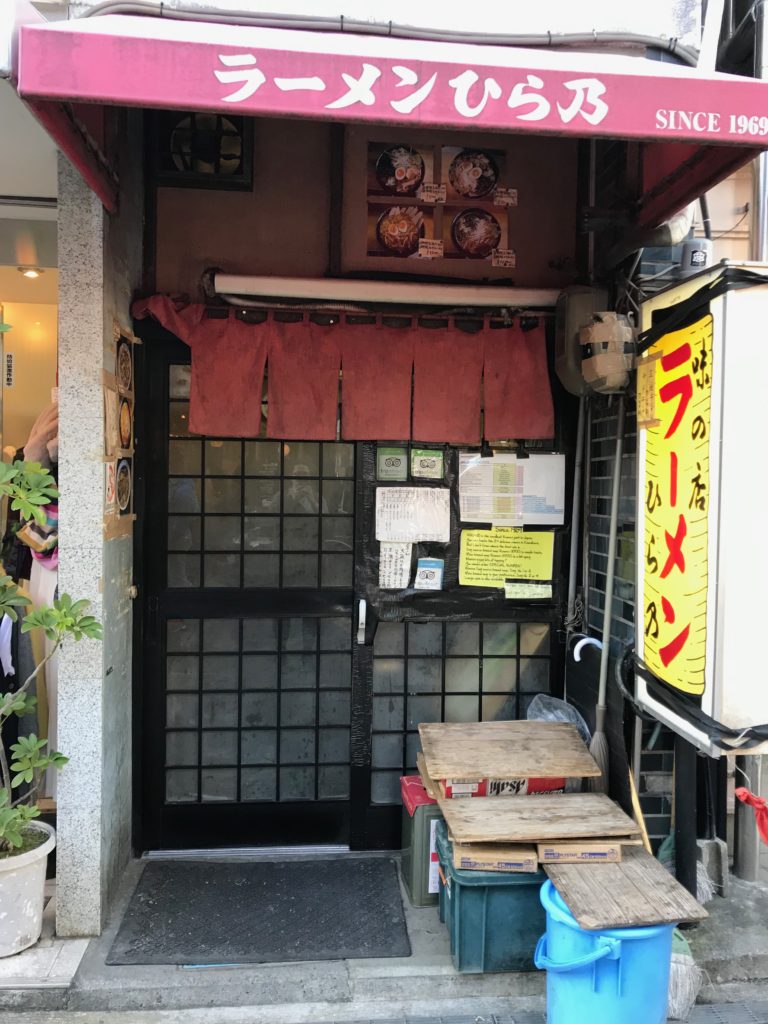 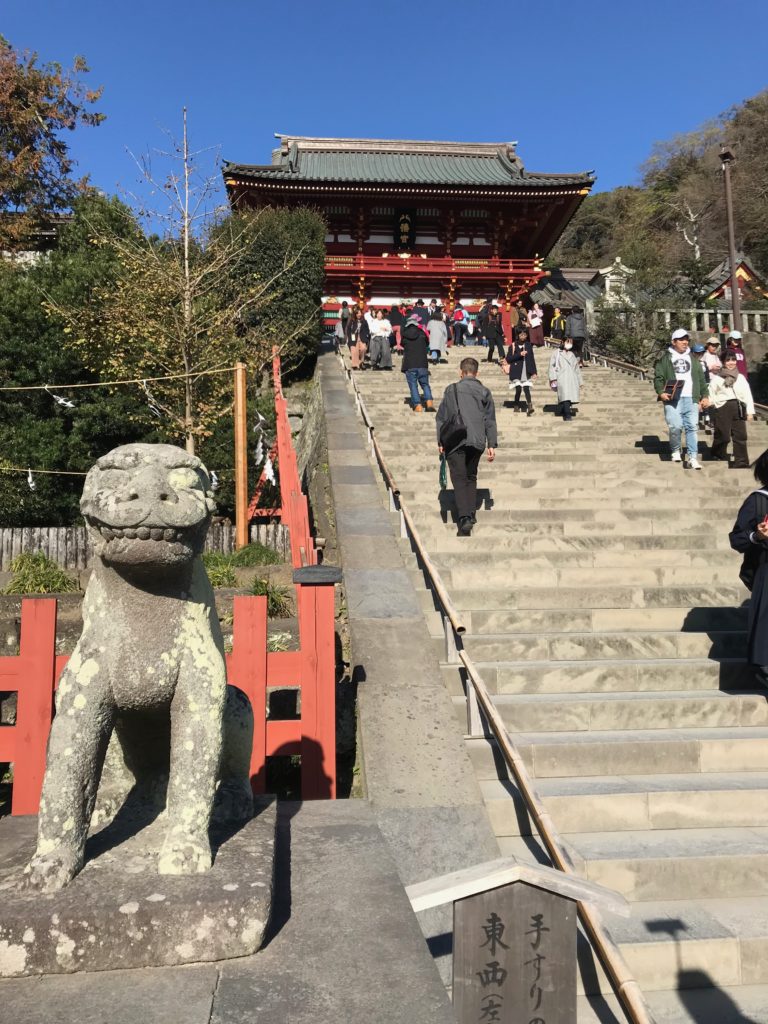 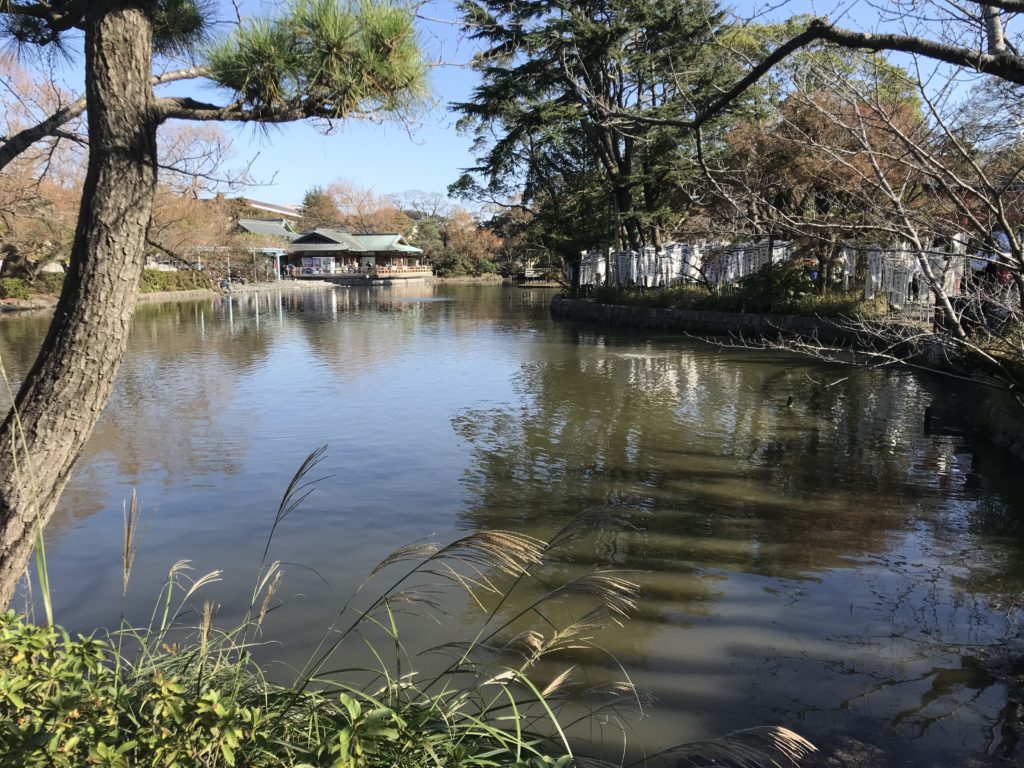 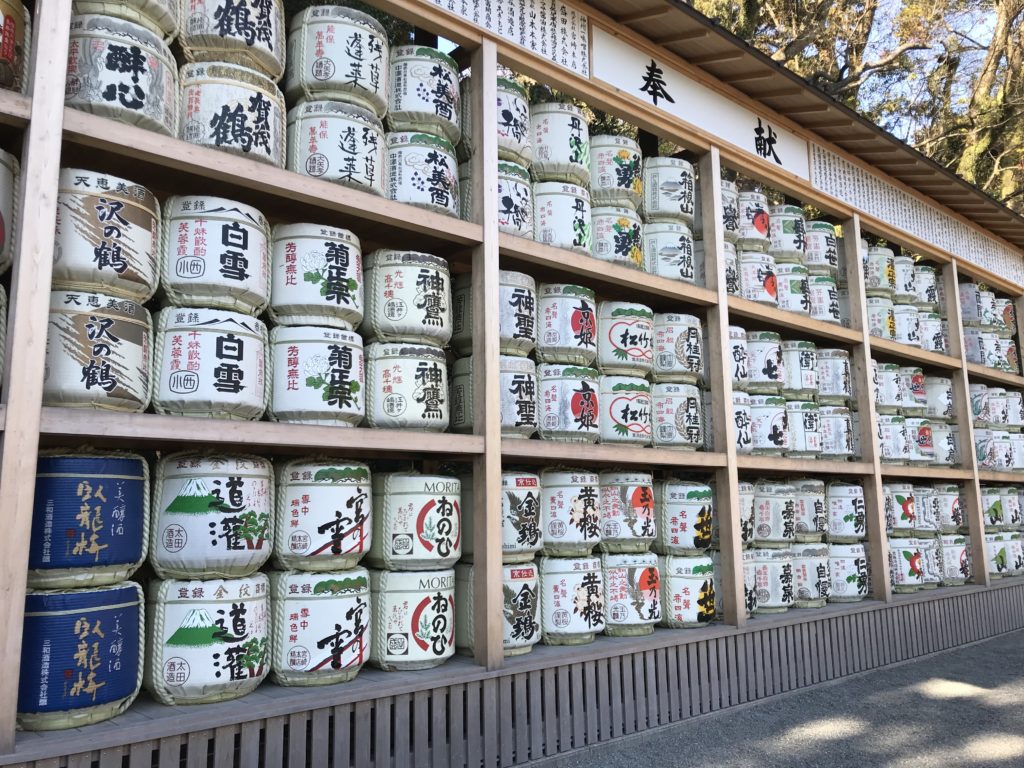 Even though I detest recounting my travel not in chronological order, for the sake of geography that’s exactly what I am going to do here. After Kamakura, we went to Kyoto and continued on to the south of Japan, but I will save that for my next posts, and finish this post instead with the rest of Tokyo, which we saw on the last day of our trip. We headed straight to the National Museum of Tokyo, which housed a wonderful collection of both pre-Edo and Edo works, the main distinction being that the Edo period was the first time Japan’s borders were opened to foreigners. 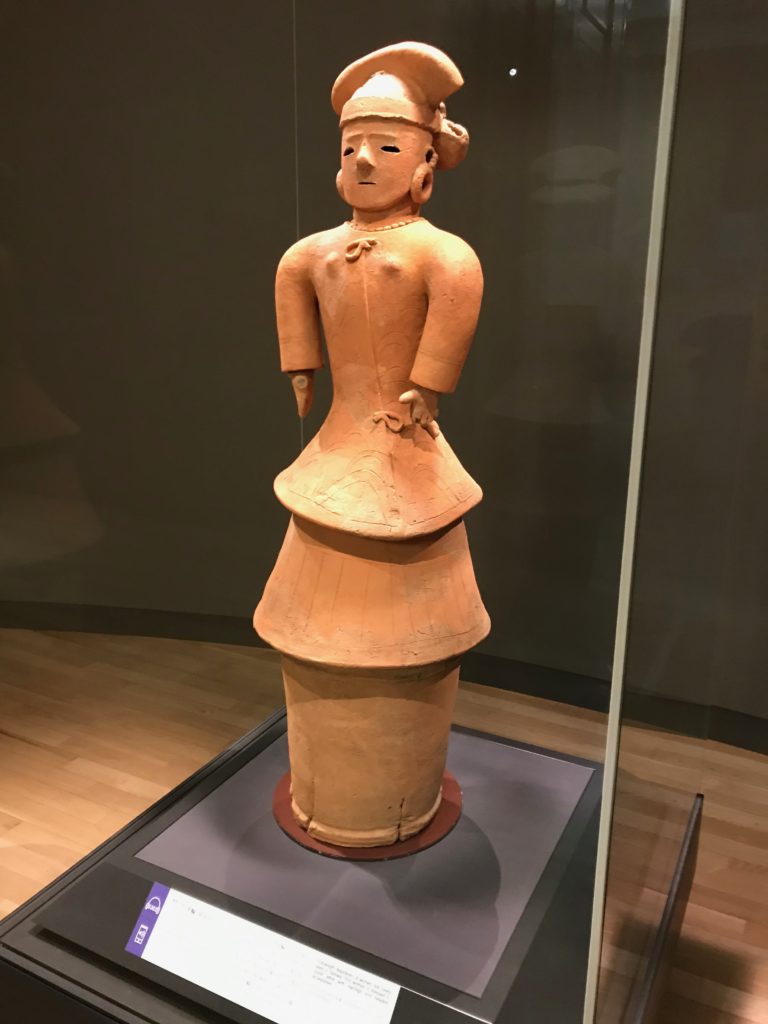 Then we headed to the last temple of our trip, and also the oldest one in Tokyo: the Sensō-ji. It featured a large five-story pagoda (so picturesque!) and a lovely little street with shops where I bought a pretty bracelet (I love touristy souvenirs, it’s one of my many weaknesses.) 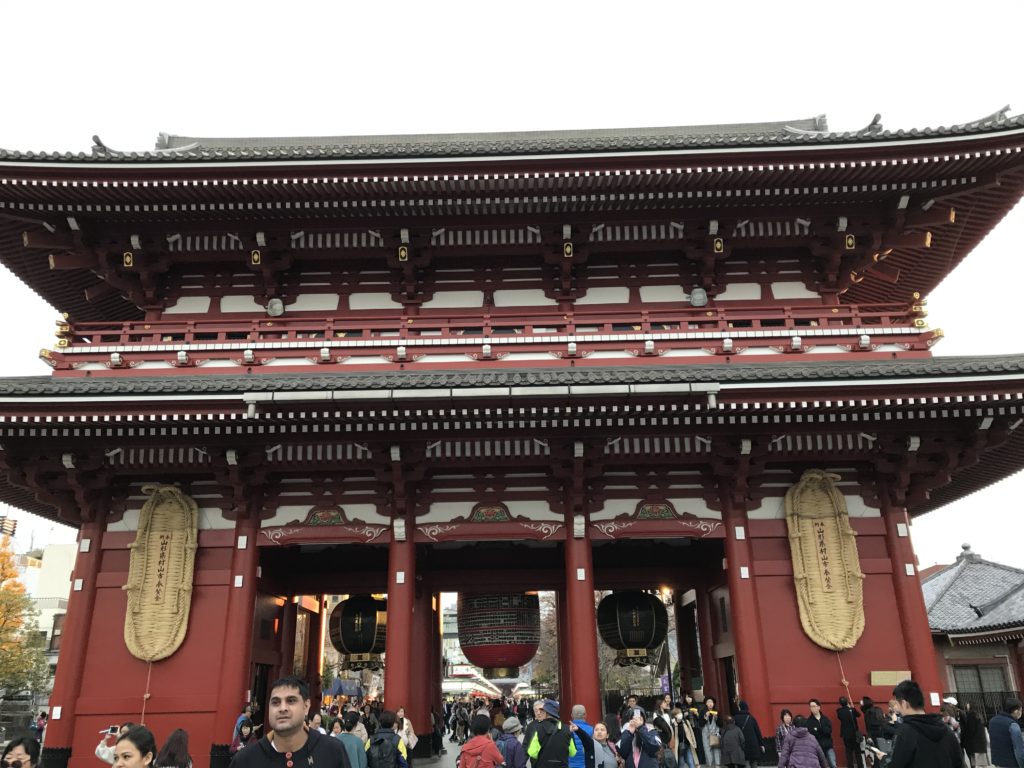 We finished off our trip with two of the things I love the most: sushi and Pokemón. The sushi restaurant we went to had been at the top of my list because it was run entirely by women. In Japanese culture, women are too ‘dirty’ to touch sushi and thus cannot prepare it, but the owner of this sushi restaurant has been doing an excellent job of turning this harmful cultural tradition into dust. (It’s called Nadeshiko Sushi if you’re ever in Tokyo!) 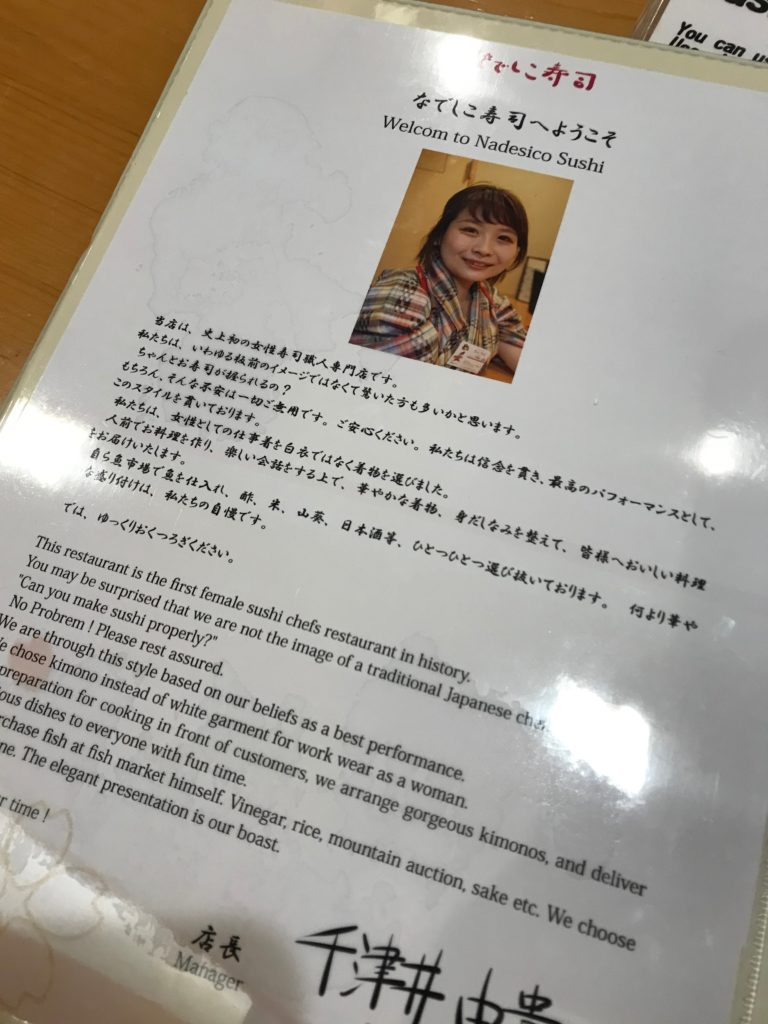 Our last stop was—you guessed it—to the Pokemón-themed café in downtown Tokyo. It was so much fun! Between Pokemón slushies and parfaits, and the Pokemón decorations covering the café itself, we had a great time. Tokyo is definitely the place to go for themed fun: they also have cat cafés, otter cafés, owl cafés, and a Dragonball Z café, among many others. 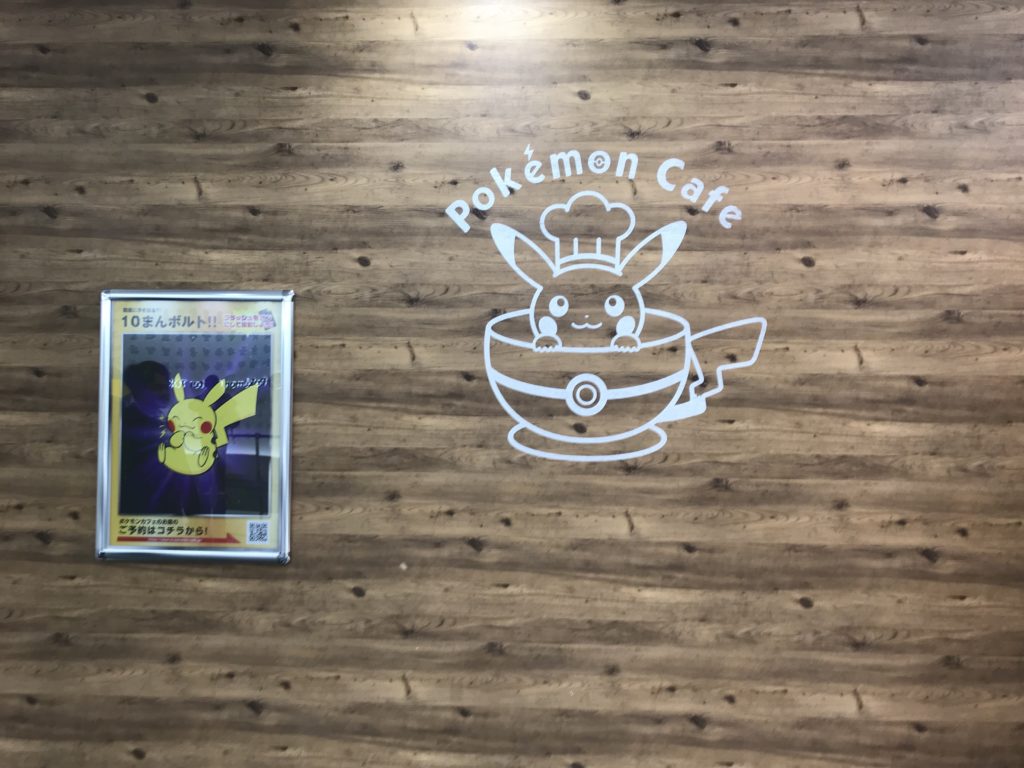 Next we are off to Kyoto, so stay tuned!